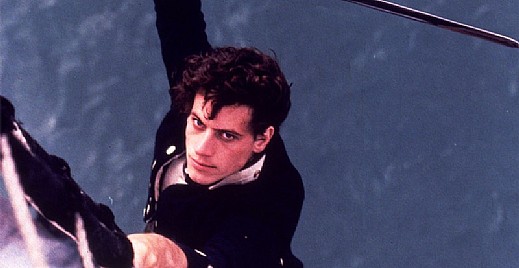 Author C.S. Forester’s fictional character Horatio Hornblower has been featured in a wide array of books, film and television programs. The popular British character is an adventurer, a hero and a naval legend. His exploits have been the subject of many forms of media and now A&E has released C.S. Forester’s Horatio Hornblower: The Further Adventures on DVD, a set which contains two feature-length made-for-TV movies. They are The Duchess and the Devil and The Wrong War. They come in a robust 2-disc set which is filled to the brim with so-so acting, decent dialogue and exciting high sea adventure.

Originally released in 1999, The Duchess and the Devil comprises the first disc and it is a very melodramatic and uneventful tale. Ioan Grufford who played Mr. Fantastic in the Fantastic Four films stars as Horatio Hornblower, a young Royal Naval officer who rises through the ranks due to his quick thinking, bravery and unwavering sense of leadership.

This film chronicles his adventure in the aftermath of capturing the French vessel, Le Reve. After the ship‘s capture, Hornblower’s superior, Captain Pellew (Robert Lindsay) asks him to sail the vessel back to England so it can be made ready for the Royal Navy. Also, the Duchess of Wharfedale (Cherie Lunghi) rides along to be transported back to England as well. However, along the way, Le Reve and the entire crew including Hornblower and the Duchess are captured and imprisoned by the Spanish. It is then up to Hornblower and his crew to escape their captors.

The second movie The Wrong War, also released in 1999 is equally melodramatic however it does feature some over-the-top and memorable performances. Antony Sher (Shakespeare in Love) for one plays the sinister Colonel Moncoutant, a merciless French commander who enjoys using the guillotine on his prisoners. Armed with a group of British soldiers and French nationalists, Hornblower is called to fight in the French Revolution. Once there, Hornblower finds a bit of romance with a beautiful young French school teacher Mariette (Estelle Skornik).

The acting in C.S. Forester’s Horatio Hornblower: The Further Adventures is just okay. Ioan Grufford plays Hornblower as a strapping, young gentleman who uses common sense, reason and intelligence to get out of the problems he comes across. Almost like a British Superman, Grufford is clean-cut, dashing and courageous as Hornblower. The man certainly knows what he’s doing. The rest of cast however with the exception of Antony Sher is pretty wooden. It’s like they don’t care that they’re in a movie and their lack of thespian passion is very apparent. Some of them seem like a waste of space as they populate the screen adding nothing valuable to the stories.

The action in the two films is also rather lackluster. There are lame explosions and cheesy sound effects which is pretty surprising for a relatively big-budget production. You would think the production value would be a bit higher but alas, it is not. I also have some qualms regarding the dialogue which seems like it was lifted from a bad soap opera. I didn’t sympathize or really care about the supporting characters and that left me feeling a little unsatisfied.

C.S. Forester’s Horatio Hornblower: The Further Adventures is definitely not a masterpiece however it isn’t terrible either. It falls right in the middle of quality and crap and it makes for a very average viewing experience. The two films presented in the DVD set fall under the dramatic/action category and if you are a fan of Hornblower and his adventures and enjoy British TV-movies that don’t really serve any purpose, then this slow-moving vessel is just for you.

The extras are pretty good. There are two fascinating featurettes. One is a behind-the-scenes making of Horatio Hornblower documentary and the other is a historical documentary titled “England’s Royal Warships”. It is hosted by Edward Windsor, Earl of Wessex and it is very informative.