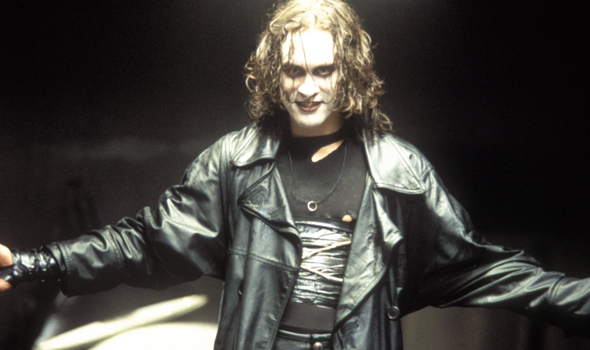 What happens when Batman, the wrestler Sting and Edward Scissorhands all have a love child together? You get one hell of a cool superhero film. The film I’m talking about is The Crow and if you have overlooked this gritty crime thriller in the past, then I highly recommend giving it a try now. It’s out on Blu-ray and digital copy and it would be the perfect stocking-stuffer for your Goth/alternative significant other.

The Crow is a dark and violent tale of a man named Eric Draven (Brandon Lee), who on the night before Halloween known as Devil’s Night gets murdered along with his fiance by a random gang. The couple were to be wed on Halloween but a less fortunate outcome awaited them. One year later, a crow sits on top of Draven’s gravestone and seconds later, Draven emerges from the grave alive and disoriented. The crow’s touch somehow brought Draven back to life and after a few moments of confusion, Draven remembers who killed him and his fiance and soon decides that he will avenge those who murdered him and his fiance.

Draven, now a white face-painted vigilante goes on a quest to bring his killers to justice crosses paths with police officer Sergeant Albrecht (Ernie Hudson). Together, they help one another clean up the streets. Draven picks off each gang member one by one fueled by revenge and seemingly invulnerable to injury.

The Crow is an intriguing film. It has many elements of a Tim Burton crime-fighting adventure as well as the blood and guts of horror-thriller. The genre in which this film would be placed would be an action-thriller. Many of the scenes are drenched in rain and dark and dirty. Another film one can compare The Crow to might be The Matrix. The world the filmmakers created for The Crow is gritty and gloomy. It definitely feels like a comic book in motion.

The late Brandon Lee (Bruce Lee’s son) stars in The Crow as Draven, the vengeful antihero and his performance is truly wonderful. He is full of anger and thirsty for justice. The intensity he brings to the role is rather intimidating and the hoods he sets out to eradicate know they’re in trouble when faced off against Draven. Apart from the immense anger, there is a little bit of insanity in Draven’s eyes. He is a man who has died and returned to life. Lee plays the character of Draven with a strong amount of complexity.

An unfortunate bit of trivia concerning The Crow is that Brandon Lee was accidentally killed during one scene. He sustained a gunshot wound when filming a scene in which his character was shot. The gun contained a dummy bullet and a blank cartridge propelled the bullet into Lee’s abdomen. He was taken to a hospital where he died hours later. He was only 28 years-old. This freak accident sent shockwaves throughout the film industry and prompted crew members to exercise better judgement when it came to safety.

Despite Lee’s untimely death during production of this film, The Crow has gone on to cultivate a strong cult following. It is a comic book film with elements of the thriller genre and it is a pretty awesome movie to look at. The rain that seems to perpetually fall adds tension and drama to this shadowy adventure. Superhero and vigilante films didn’t really succeed in the 90’s but The Crow managed to slip through the cracks and go on to win the hearts of many underground video fans. Also, Brandon Lee left this world way too soon and his final performance will be forever remembered as a leather-clad hero who wanted nothing more than absolute justice. Mr. Lee, you will always be remembered for The Crow, thank you.

The bonus features for The Crow are pretty great. There is a feature-length audio commentary with director Alex Proyas, a behind-the-scenes featurette, a profile of James O’Barr, extended scenes, a deleted footage montage, original poster concepts, storyboards and lastly, a theatrical trailer for the film.