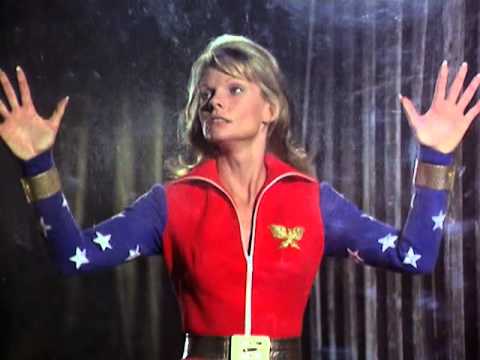 In 1974, Warner Brothers released a Wonder Woman TV movie. It was a failed attempt at bringing the famous Amazonian superheroine to TV audiences. It was released before the much more successful Wonder Woman series which came just one year after it. Cathy Lee Crosby took on the role and the results were less than stellar. The very cheesy and psychedelic production seemed overpriced and uninteresting. It is now out on DVD, so view it at your own risk.

Diana Prince/Wonder Woman (Crosby) is the secretary to a government agent. She is soon thrust into a world of international intrigue and danger. Her mission to pursue a villainous individual named Abner Smith played by the typecast 1970s bad guy actor Ricardo Montalban. The majority of the film plays like a lame James Bond meets Austin Powers piece. Crosby is fine as the superspy but not sensational. She is a bit wooden in her performance. This is probably why Lynda Carter replaced her later on.

1974’s Wonder Woman is an insult to the DC Comics superhero. Instead of portraying her the way she was originally intended, the filmmakers here have made a boring secret agent movie with dated music, corny humor and ridiculous performances. Wonder Woman is a strong character who fights evil and looks good doing it. Crosby looks good but her acting is simply disappointing. The Shaft-like music is what truly hurts this film. Wonder Woman should not have an expiration date but this film definitely died and rotted away in the 1970s.

There are no bonus features for Wonder Woman.