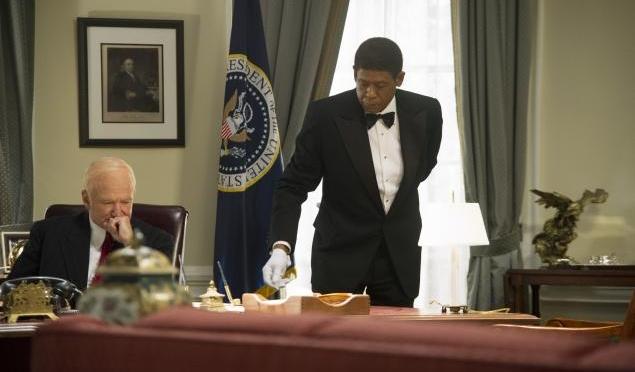 Every once in a while a film comes along that hits all the right notes, a film that not only entertains but digs deep and explores tough topics. Lee Daniels’ The Butler is one such film and it is both a history lesson and one heck of a story. With an ensemble cast featuring Forest Whitaker, Oprah Winfrey, Cuba Gooding, Jr., Alan Rickman, Jane Fonda, John Cusack, Liev Schreiber, Terrence Howard, Mariah Carey and Robin Williams, The Butler has all the trappings of an Oscar contender and then some.

The film is based on the true story of Eugene Allen, an African-American man born on a cotton field, only to end up as the head butler of the White House, serving eight presidents over the course of 34 years. Forest Whitaker plays Cecil Gaines (name changed from Allen) and witnesses key events throughout American history, all on the sidelines as a quiet and trusted servant. The presidents he serves all ask Cecil for his two cents every now and then, making him a valuable member of the White House staff.

Oprah Winfrey gives an impressive performance as Cecil’s supportive wife and so does David Oyelowo (Lincoln, Rise of the Planet of the Apes) who plays Cecil’s ambitious and stubborn son who gets involved in the Civil Rights Movement of the 1960s. The rest of the cast is an eclectic bunch who add a nice touch of class to the proceedings. The highlights include Robin Williams as Dwight E. Eisenhower, James Marsden as John F. Kennedy, Liev Schreiber as Lyndon B. Johnson, John Cusack as Richard Nixon and Alan Rickman and Jane Fonda as Mr. and Mrs. Ronald Reagan.

With such a talented cast, The Butler is not only a period piece, it is a film that spotlights the incredible range and chemistry each of the players has with one another. Whitaker is tremendous in the role of Cecil. His character is humble, hardworking and smart. The scenes he shares with the presidents are genuine, sincere and sometimes pretty funny. His relationship with his family is also realistic and full of heart and with his son joining the Black Panther Movement and risking his life to fight racial injustice, Cecil is occasionally pushed to the limit.

Set during the 60s, the fitting soundtrack reflects the time period beautifully. The sets and costumes are also great especially the White House. It really feels like you’re there. The White House is almost a character all in itself and it’s worth mentioning that Cuba Gooding, Jr. and Lenny Kravitz provide some delightful comic relief as fellow White House servers.

With Cecil doing well at the White House, the country around him is in a state of turmoil. The Vietnam War is raging and racism is threatening the country, especially in the south. All of this is happening while Cecil is dusting furniture. He does however have an opinion and that little voice in the corner is heard loud and clear by all the presidents for whom he serves.

Director Lee Daniels of Precious fame has given audiences another cinematic gem here in The Butler. There are some very good shots and editing as well as a wonderful script by Danny Strong (Recount, Game Change). The film is the perfect marriage of cast and crew and everyone involved with The Butler deserves recognition. Forest Whitaker never fails to impress and he has really made Cecil Gaines his own. He is a truly unique actor and his range really knows no bounds. He just might have a shot at winning Oscar number two.

One might compare The Butler to Forrest Gump because of its narrative: an ordinary man going through life while extraordinary and sometimes painful events surround him. This film is destined to win a few awards. It might even win the coveted Best Picture Oscar. It wouldn’t be surprising. Nevertheless, if it doesn’t win, it will certainly live on with anyone who respects quality film.