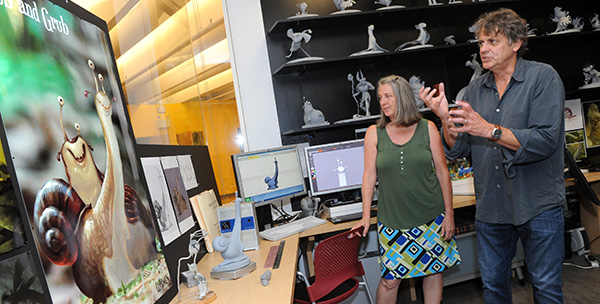 In animation, anything is possible. Worlds and characters are created and grace the screen, captivating audiences and leaving an indelible impression on both young and old (mostly young). On Tuesday, August 13th, I had the immense privilege and pleasure of visiting Blue Sky Studios, an animation studio responsible for such films as Ice Age, Dr. Seuss’ Horton Hears a Who, and Rio. The incredibly talented people behind these films are basically wizards who, through the use of skill and technology, create films that not only look great but tell interesting stories. The purpose of this event was to promote the Epic Blu-ray/DVD combo pack which is now available for purchase.

It was a rainy Tuesday morning and upon arriving at the Manhattan rendezvous spot, I boarded a bus to take me and everyone else to the Blue Sky Studios facility in Greenwich, Connecticut. The trip was a pleasant one and the journey to the studio reminded me a little of Jurassic Park. We finally arrived at the studio and from the outside, the facility looked like your typical office space but what was inside was anything but ordinary.

Breaking up into groups, we were all taken on a tour of the various departments within the studio. First stop was the sculpting department where we met a true artist in every sense of the word, Vicki Saulls. She spoke about the highly technical process of 3D printing and creating sculptures of characters for Blue Sky’s films, more specifically those who appeared in Epic.

Next up was the rigging department, where digital puppeteer Sabine Heller showed us the intricate process of generating and controlling the skeleton of digital characters. After that, we moved on to the story department where Warren Leonhardt gave a colorful demonstration of the storyboard process. He provided dialogue as he basically showed us a digital, flip book of a scene from Epic (cool). The last stop was the animation department and we were given yet another fascinating demonstration, this time by David Sloss of how the animated characters move and interact with one another and their surroundings.

With such a creative and quirky group of people, their surroundings matched their personalities and then some. Many of the offices and cubicles contained movie posters, dolls and action figures. The animation department was the most fun in terms of decorations. There were tiki hut decorations and one office was even decorated in Dr. Seuss-like fashion. All in all, the team at Blue Sky Studios certainly know how to have fun while they work.

After the tour, we were given a very thorough presentation of Epic by director and co-founder of Blue Sky Chris Wedge, production designer Greg Couch and art director Mike Knapp. They each took turns explaining the highly detailed work that went into making the film. They stayed for a Q&A session afterward as well as a photo opportunity.

After all the animation process was discussed, we were all treated to a nice lunch in the “Scrat Conference Room.” Now, if one goes on a tour of Blue Sky Studios and doesn’t feel like watching one of their brilliant animated films, something may be wrong. This was the perfect promotional event to get people to buy their film and even check out older films like Ice Age. Blue Sky is a marvelous company and their animation team is one composed of wizards and geniuses.