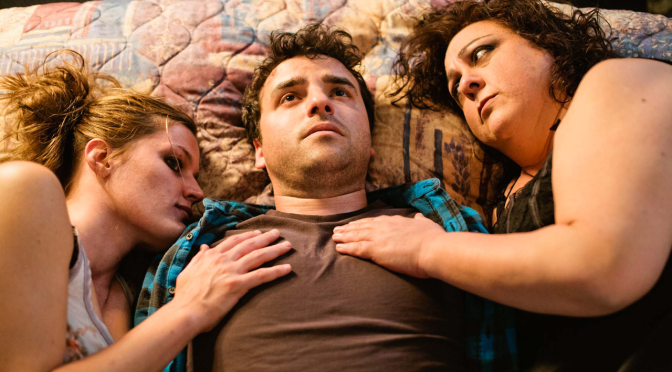 Friendship is all about compromise. Any true bond that lasts and endures relies heavily on the notion that he, she, or they will do almost anything for the good of the relationship. Such a bond is tested in the new dramedyThe Big Ask. In this honest, slightly gritty indie film, we see just how much one person relies on his friends and how a rather unusual request can instill random emotions and reactions from a small group of people.

Andrew (David Krumholtz) has just lost his mother to cancer. He moves into a new house in Joshua Tree with his girlfriend Hannah (Melanie Lynskey). To cope with his grief, Andrew invites two other couples/close friends to his home to basically sit shiva with him. Andrew, however, has other plans in mind. He asks the other two women in the group to have sex with him to help ease his pain. At first, everyone in the group thinks it’s a joke, but Andrew is far from kidding. His girlfriend and everyone else in the group are confused and understandably disgusted. The remainder of the film basically highlights everyone’s discomfort and how they react to this very awkward situation.

With a film like The Big Ask, audiences might expect raunchy humor and big laughs and with a premise like “sleeping with other guys’ girlfriends”, that is to be expected. Luckily, this film does not go that tired route. Instead of a Fratpack-esque tone, the filmmakers have opted for a more realistic and genuine feel. Indie dramedies are widely known for tackling goofy stories in earnest and believable ways. It is because of this, that the indie dramedy is perhaps the most accurate depiction of real life because life is at times funny and at other times, very heartbreaking.

Newcomer directors Thomas Beatty and Rebecca Fishman have really captured the whole friendship dynamic in The Big Ask. The events which unfold on screen are absolutely wonderful. The Joshua Tree desert is the perfect environment to have such a crazy story take place. Hopefully, Beatty and Fishman will collaborate again soon because their work together is artistic. Beatty also penned the screenplay, which also deserves acclaim. The dialogue coupled with the actors who recite it is really something special. Having circulated in some film festivals last year, The Big Ask is a dark, quirky, often awkward and successful dramedy.

The Big Ask will be available on VOD on May 20th with a select theatrical release beginning May 30th.