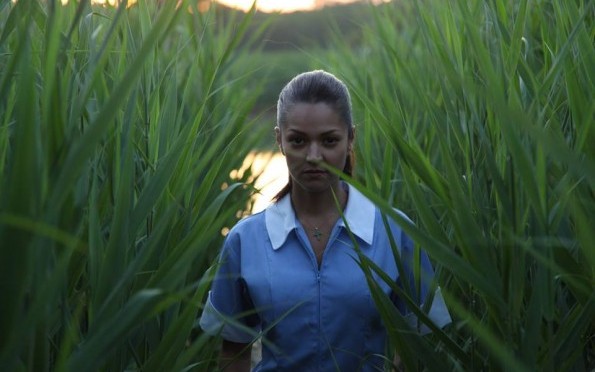 Viewing a psychological thriller is an excellent way to get sucked into a world full of dark, shady, and morally-questionable characters. The way people think and behave is at the forefront of many thrillers and the situations the characters get into provides for highly entertaining examples of cinema. The simple and independent The Maid’s Room is a perfect example of a movie in which the characters dig themselves deeper and deeper and pull the audience in, asking “What is wrong with these people?”

The Maid’s Room is a very tragic and complicated film. Drina (Paula Garces) is a Colombian immigrant who secures a job as a live-in maid to a wealthy family in Suffolk, New York. The Crawfords are a typical family of means. They consist of the stern but understanding father (Bill Camp), the equally understanding and nurturing mother (Anabella Sciorra), and the rambunctious yet slightly conscientious teen son Brandon (Phillip Ettinger). When a drunk driving accident puts Brandon into a difficult situation, the Crawfords must spring into action to avoid legal action. Drina, the silenced voice, must then choose between what’s right and what’s wrong.

Films like The Maid’s Room are a welcome addition to the ever flowing river of cinematic endeavors. Sure, it isn’t a great film and Bill Camp’s performance can be described as over-the-top and unbelievable but the intention of the film is a good one. All of the actors including Camp are performing to the best of their ability. Sciorra is serviceable as the morally ambiguous mother and Garces is just fine as the maid put in the middle of a very precarious situation. The real star of the film might have to be Ettinger, who is just mesmerizing as the privileged son who must clean up his own mess. He plays Brandon with just the right mix of arrogance and youthful innocence.

The Maid’s Room has many strengths. It is a taut thriller with a strong Hitchcockian influence. The mess that the Crawfords and Drina get into is very believable and realistic. Writer/director Michael Walker has painted a creepy picture here and his camerawork makes things feel like a pseudo documentary. The seclusion of the Crawford house mixed with the darkness of night and crickets also sets the mood for a very eerie film. If anything, The Maid’s Room certainly sets a mood that is relatable and full of tension.

The entire production of The Maid’s Room seems very modest. There is just one set, a handful of actors, and a camera that shoots a lot of shaky and first-person angles. This isn’t a criticism but merely an observation. That independence makes the film feel gritty and real. The four main actors do a fine job in the film and the story is disturbing and full of layers. It is very challenging to come up with an original idea for a thriller this day and age and while The Maid’s Room isn’t exactly a motion picture classic, it is definitely worthy of your time if you’re in the mood for a tense and exciting film.