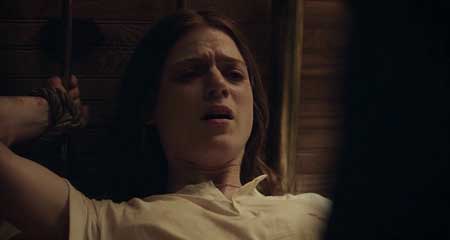 It would appear that the modern horror film is severely lacking this day and age. Loud crashes and found cinema seem to be all the rage since Saw’s ridiculously gruesome torture porn reign is over. Filmmakers seem to be at a loss when it comes to originality when scaring their audiences. Luckily, there is the occasional spark of horror creativity. The latest comes from newcomer director Leigh Janiak who has taken audiences into the woods for what may seem predictable and by-the-numbers but is actually a fresh take on an established setting and popular formula. Honeymoon is a tense and unpredictable horror/thriller which may actually throw you for a loop.

Newly married couple Bea (Rose Leslie) and Paul (Harry Treadaway) are adorable, young and innocent. They decide to spend their honeymoon in a cabin in the middle of a secluded forest. Once there, all seems good until Bea apparently sleeps walk into the middle of the woods. After that, weird things start to happen especially when Paul spots bruises up and down Bea’s legs. Bea then begins to act strangely and Paul desperately tries to figure out what on Earth is going on.

Honeymoon may seem like your typical middle of the woods horror film and at times, it is just that. But there is also a strong psychological aspect which makes things very interesting. Paul’s search for answers leads him to some very disturbing realizations and Bea’s bizarre behavior is at times, the stuff of acting brilliance. Together, this young couple in love is faced with the dark and disturbing supernatural when they should be enjoying their honeymoon. What started out as a lovely romantic time in an old cabin soon turns into a strange, twisted and troubling time in the middle of nowhere.

Youthful European actors Rose Leslie (Scottish) and Harry Treadaway (English) knock it out of the park as the doomed couple on their honeymoon. Treadaway plays the husband with a frenetic energy slightly reminiscent of Bruce Campbell in the Evil Dead trilogy. He definitely knows how play the concerned frantic husband very well. Leslie’s acting is also top notch as she plays what appears to be someone possessed by a dark entity. Together, they certainly make strong onscreen pair.

Few horror films nowadays manage to pull off the frights. To be scared from a movie seems to be a thing of the past. That is until, Honeymoon came along. The scariest aspect of this film isn’t loud unexpected noises or gratuitous violence. It is the psychological aspect of the two characters, Bea’s descent into darkness and Paul’s attempt to save her from whatever that darkness is. The real fear in Honeymoon is not some gruesome monster, it is “not knowing” and that lack of information provides for one hell of a scary ride. With Halloween coming up next month, Honeymoon is the perfect film to see with a group who enjoy quality horror. The setting and premise may seem familiar but the fresh spin on it makes it truly worthwhile.

Honeymoon will be released theatrically on September 12th, 2014