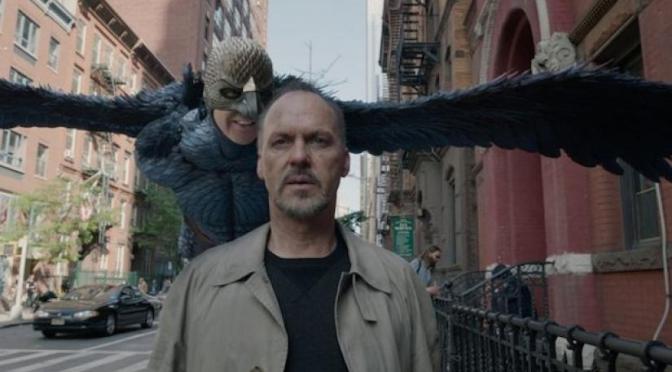 They say life imitates art. But in some cases, art imitates life and truer words have never been spoken in the new film Birdman or (The Unexpected Virtue of Ignorance). This unique motion picture event will not only leave you scratching your head wondering what just happened but will leave an everlasting impression because of its artful and utterly mesmerizing impact. Birdman is already earning praise from critics and seems to be one of the frontrunners come award season. It is a cinematic phenomenon that simply needs to be experienced.

The film focuses on Riggan Thomson (Michael Keaton), an actor who has passed his prime. He is well-known for portraying the superhero Birdman on screen some 20 years ago. He is now in a  bit of a spiritual funk, trying to make a comeback in a Broadway show. He is not only struggling with his career but with his family as well. His daughter (Emma Stone) resents him because of his failed marriage to her mother (Amy Ryan). Tension exists with his producer (Zack Galifinakis), his co-star (Naomi Watts) and a cocky younger new addition to the Broadway show Mike Shiner (Edward Norton). The whole young versus older actor conflict serves as the main conflict in the film.

With one of the strongest casts of any film out today, Birdman is a true sensation. Keaton basically plays a fictionalized version of himself, the once great and respected actor whose glory days are now behind him. He is now attempting to reclaim that glory with a lavish production that he and critics have high hopes for. Emma Stone gives one of the best performances of her young career as Riggan’s sassy daughter. Galifinakis is subdued yet comical as his producer. But the main supporting highlight comes from Edward Norton who plays the hotshot actor brought on to improve the quality of the show. His rivalry with Riggan is the stuff of true comedic magic and every scene they share is not only funny but painfully realistic.

Filmmaker Alejandro Gonzalez Inarritu (Babel, Amores Perros) has given audiences another cinematic gem with Birdman. The style is so unique and so beautiful that no other film has come close to matching its genius. Inarritu’s screenplay is genuine and feels totally improvised from Riggan’s inner monologues to the fast paced energy of the characters around him. Academy Award-winning cinematographer Emmanuel Lubezki (Gravity, Children of Men) is also one of the film’s true talents by making it seem as though Birdman was shot in one continuous long take ala Alfred Hitchock’s 1948 thriller Rope.

The real beauty of Birdman comes from a variety of factors. Not only is the acting brilliant from every cast member and the visual style strangely beautiful but the fact that Michael Keaton is basically playing himself, an actor who used to be on top of the world for playing a popular superhero but has now been reduced to a washed up performer hoping to get back on top. This self-referential performance is not only brave and down-to-earth but smart and downright funny.