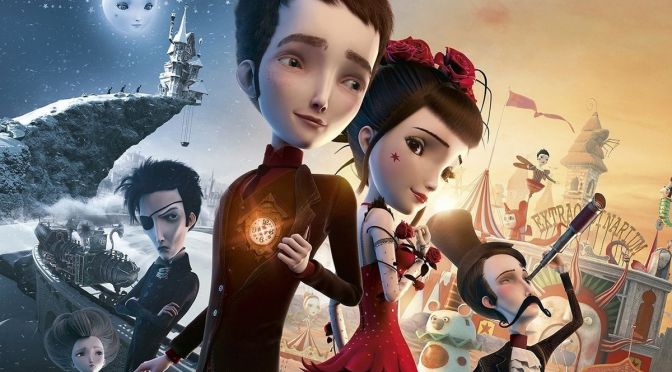 Every once in a while, an animated film comes along that isn’t just beautiful visually but contains a message and story that is truly mesmerizing and utterly out of this world. Jack and the Cuckoo-Clock Heart is one such film and it is a French export which will certainly touch your heart. Now out on Blu-ray and DVD, this film is yours to own and to marvel at in gorgeous high definition. Not only does it look great but it sounds great as well with an absolutely brilliant soundtrack by French rock band Dionysos. With all of these elements firmly in place, Jack is one animated film you won’t want to miss.

Based on the concept album and illustrated novel by rock band Dionysos, Jack is a rather grown up film. Though animated, it deals with themes and plot points not normally seen in children’s entertainment. Jack is a computer-animated feature for a more mature audience and this is quite evident with its story. Taking place in Edinburgh, Scotland in 1874, the film follows Jack, a teenage boy who was born on the coldest day ever. Because of this, he was born with a frozen heart. In order to save him, a midwife grafted a cuckoo clock to his body to replace his heart. Now, he lives but he mustn’t break two very important rules: not to lose his temper and never to fall in love. If he breaks either of these rules, his clock heart will break and he will die. Upon meeting the angelic Lady Acacia and after series of unfortunate events, Jack must flee Edinburgh and seek his true love even though he is forbidden to do so.

With a plot fit for a standard PG-13 adventure, Jack is an extraordinarily unique piece of cinema. The animation is so good and so clean that it almost puts many Pixar films to shame. There are sequences that feel like dreams and the action sequences are fast and wicked. There is a scene featuring a haunted ghost train and the way in which this scene unfolds is the stuff of animation genius. The same can be said about the rest of the film and with a strong Tim Burton-esque feel; Jack is without a doubt, a work of art.

Directors Stéphane Bernasconi and Mathias Muchus of Dionysos have put together a real treat for the senses. With superb animation and a rocking soundtrack, both the eyes and ears will thank you when you view this animated gem. With strong similarities to Burton’s animated film The Corpse Bride, I’d say Jack is phenomenally better. It is a far superior film for a great many reasons and they are its subject matter, its music (sorry Danny Elfman) and its flawless animation. While not for the young ones, Jack can be appreciated by slightly older kids and up. France has delivered quite a film here and if you want to be delighted on pretty much every level a film offers, then Jack and the Cuckoo-Clock Heart is certainly worth your time.

There are character vignettes and a book to screen featurette.