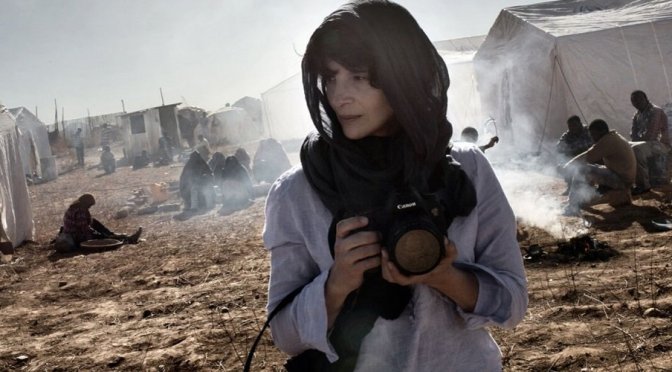 The line between work and family is tight rope to walk sometimes. What comes first and what’s top priority? Sure, family might seem like the more important of the two but for some people, that simply isn’t the case. The new Irish-Norwegian drama 1,000 Times Good Night explores this subject very well and not only is it crucial issue to examine, it offers a chance for film star Juliette Binoche to play a character who is troubled and caught between what she loves to do and the strong concern her family has for her.

The film revolves around Rebecca (Binoche), a photojournalist with a passion for shooting in conflict zones. She travels the world taking photos where her safety is often compromised. This doesn’t seem to faze her as she continues to document some of the very worst in some of the most volatile areas. When she gets severely injured in an explosion during a job in the Middle East, her job is interrupted and she is forced to take it easy at home. With her family around and career put on hold, Rebecca must deal with the slower pace of home life while she yearns to go back out in the field again.

1,000 Times Good Night is Binoche’s film through and through. She is the star and her character is a strong one, someone who has seen it all and loves her family but is addicted to the danger her job puts her in. The main conflict in the film focuses on Rebecca and her husband Marcus (Nikolaj Coster-Waldau), an all around good guy whose sole purpose is to protect his family, primarily Rebecca. The two of them fight and make up during the film and their relationship is a rocky one to say the least. Nevertheless, their union is a solid one and makes for some decent cinema.

This is human drama, without a doubt. The issues raised concern Rebecca and many people can probably relate to her plight. How does one balance work and family? It’s a balance pretty much everyone hope to maintain and at times, can be very hard work. Rebecca learns this throughout the course of the film and her journey of self-realization is some pretty powerful stuff. Binoche knocks it out of the park with 1,000 Times Good Night and her seemingly effortless job in portraying Rebecca is a real pleasure to watch.

With numerous awards for her acting over the years including an Academy Award in 1997 for her work in The English Patient, Binoche proves time and time again that she is among acting royalty, a classy French lady with a very smart way in picking roles. She is beautiful and intelligent and her roles always showcase these two attributes. 1,000 Times Good Night is another entry in the actresses’ already impressive resume and it is a film with many layers and powerful themes. Binoche might be looking at another Oscar with this film or at least another nomination.