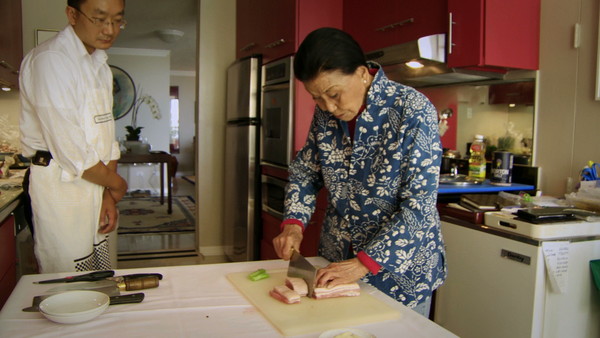 Born in Shanghai in 1920 and raised near Beijing, Cecilia Chiang is responsible for revolutionizing Chinese cooking in America for in 1961, she opened the Mandarin Restaurant in San Francisco and her flavors and techniques are known the world over. The food and the restaurant’s decor had a strong style derived from the Szechwan and Hunan provinces of China. Chiang’s dedication and passion for food is beautifully captured up in Soul of a Banquet and it is one of the most satisfying films in recent times, brilliantly bringing Chiang’s art to the forefront.

Documentaries about food are pretty much always a delight. Close-ups of the food which are so appealing that you can almost taste it and they are the main highlights of Soul of a Banquet. As mentioned earlier, food porn is all the rage and this film is full of that phenomenon. This is perfectly balanced with Chiang’s personal life, from her birth in Shanghai up until present, the woman is a marvel in the restaurant world and the work she’s done in terms of bringing new tastes to the States is the stuff of absolute legends. Chiang is interviewed in this documentary and the stories she tells are, at times, pretty accentuating. Chef and friend to Chiang, Alice Waters also  weighs in and gives her stories and anecdotes working with Chiang and her inclusion in the film is quite interesting.

One criticism is that the interview segments go on a bit long and Chiang is guilty of rambling a little bit. This does take away from film’s excellence but the shots of her culinary creations for a high-class banquet sort of make up for it. Director/producer Wayne Wang (The Joy Luck Club, Main in Manhattan) is also an artist in his own right and his shooting of Chiang’s food is simply genius. The food in Soul of a Banquet actually serves as a character and each morsel has personality. This is a little weird but it’s true. Each bite represents something different for each member of the banquet and Chiang is truly an artist with each dish being a masterpiece in its own right.

Though Chiang’s stories might be a bit of a bore, the images of her edible art are definitely worth checking out. Documentaries about food can be a little dull but Soul of a Banquet is a charming examination of an ordinary woman whose done extraordinary things. She is still alive and her style and influences has even effected her son Philip Chiang, who actually co-founded P.F. Chang’s Chinese Bistro. There is a lot of talent in the Chiang family and with this film, audiences now know how it all got started.