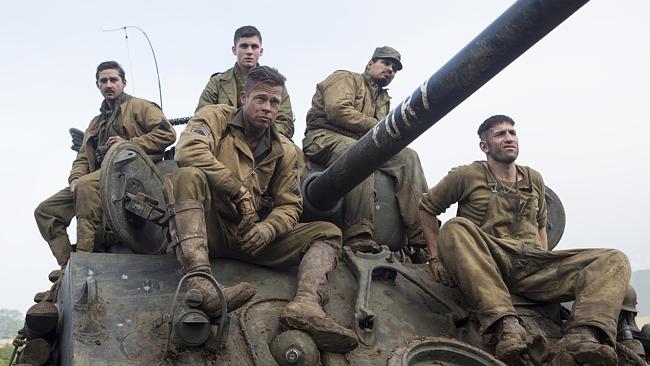 The travesty of war has been captured on film time and time again. From Apocalypse Now to Saving Private Ryan, some war films are better than others but the fact remains that war is hell and film serves as an excellent way to depict the horror and sometimes, adventure. The latest war drama Fury is a welcome addition to the genre and it not only features exhilarating action sequences but a powerful cast full of seasoned actors who fully submerge themselves in their respective roles. Brad Pitt headlines the strong cast and David Ayer pulls triple duty as writer/director/producer.

Fury has a lot going for it. The battle scenes are expertly shot by David Ayer and Dody Dorn’s editing is definitely worth praising. The audience gets sucked into the action and it almost feels like you’re right there in the tank with the soldiers. Not since Saving Private Ryan, has war on film felt so visceral and so real. The sound effects also play a major role and help elevate the action.

With explosions and gunfire rattling the senses, Fury also has a softer side and that side is presented in the camaraderie between the five men. Each has their own unique personality and at times, these personalities clash but for the most part, they mesh and it’s really a pleasure to watch. For instance, when rookie Norman joins the team, he’s insulted and bullied but as the film progresses, the men see Norman for what he is and they even share a drink.

The tank crew consists of dirty, loud and at times, very funny individuals. They are what make Fury all it can be. It’s just a shame that Brad Pitt is in charge. The man is wooden, stiff and with a monotone voice. The only positive attribute about this actor are his rugged good looks which have served him very well during his two decades in the film business. Sure, he surprises with random oddball performances like in 12 Monkeys but movies like those don’t come around too often. His work in Fury is standard Pitt fare and it’s just downright disappointing.

With the exception of Pitt, a role that could have been played by any other better actor, Fury is an entertaining action drama that uses World War II as the perfect setting for its cast to flourish dramatically. Fear, anger and resolve are all shown in the action of the brave characters dive head first into danger. Basically, if you want to see a quality war film with a terrific supporting cast, then Fury is right up your alley.