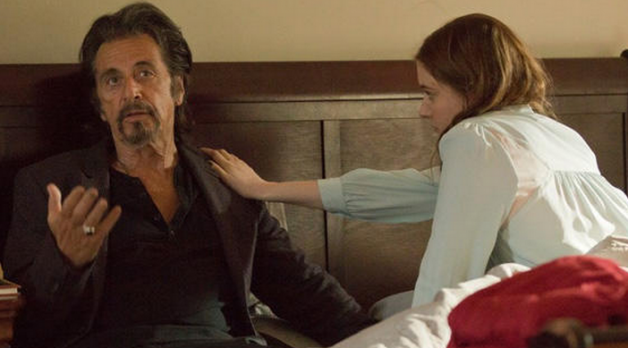 The premise of the aging actor falling from grace has been documented on film all too well. A once great performer who has fallen on hard times can serve as a very probing and interesting picture. This story is the basic skeleton of this lackluster drama The Humbling, a movie starring the legendary Al Pacino which has many parallels to reality. Pacino is an aging star in his own right and this film feels all too familiar. This type of story seems to be all the rage these days especially with Michael Keaton’s comeback performance in last year’s Birdman. Al Pacino’s movie here is a disappointing cinematic experience to say the least and with a depressing plot peppered with solid performances, there really isn’t much to marvel at in The Humbling.

Based on Philip Roth’s 2009 novel of the same name, The Humbling focuses on Simon Axler (Pacino) is a Shakespearean stage actor who’s been gradually slipping into the abyss that is dementia. As the fading star approaches 70, he seems to be losing his grip on reality. After a nervous breakdown causes him to throw himself off the stage during a performance, it soon becomes time for him to focus on rest, relaxation, and coming back to reality. After a brief hospitalization (where he meets a woman who wants him to murder her husband), Simon seeks refuge in a house way too big for just one man. He randomly crosses paths with Peegeen (Greta Gerwig) a woman in her 30s and daughter of one of Simon’s old friends. The two soon strike up a sexual relationship which has serious consequences throughout the bulk of the film.

The Humbling is an average film at best and a sobering look at “the good old days” and how time can either make or break one’s ego. Simon is a character who looks upon the glory days with firm nostalgia and his detachment from reality can be rather painful to watch. Mr. Pacino doesn’t seem to be acting here and his effortless portrayal of a once great actor now reduced to a wandering old man searching for meaning in life is pretty gloomy. Pacino is on autopilot here and the intense energy from his Scent of a Woman and Glengarry Glen Ross days seems to have officially come to an end.

On the plus side, Greta Gerwig is adorable here as the young “muse” who attempts to bring light into Simon’s dark and dreary world. Audiences might remember her from Frances Ha and Greenberg where her awkwardly sexy characters only serve to enhance the quality of the film. Her presence in The Humbling is a continuation of that type of persona and it is very much welcome indeed. Director Barry Levinson has shot this picture exquisitely but it’s a bit sad that this film has been made in the first place, highlighting the slow decline of a once great star. Al Pacino may be alive but his career is flickering like a campfire extinguished by many years of bad career choices. If you are die hard fan of Pacino then this film is worth a gander. Otherwise, it is just a very uncomfortable (and honest) look at how the famed actor has fallen into mediocrity. Hopefully we will see Mr. Pacino rise again in future roles.