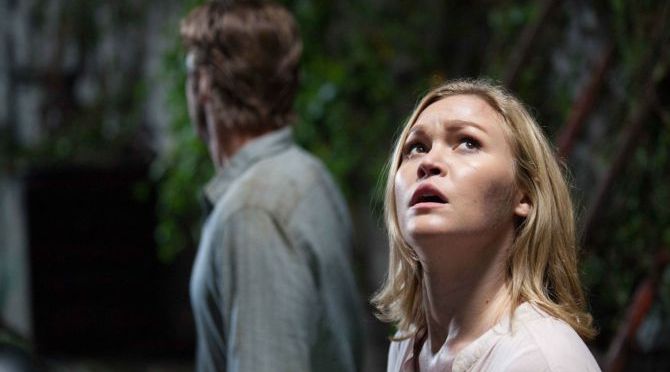 Ghosts on film provide for some of the more creepy modes of storytelling. Shadowy creatures combined with creaking floors and a fear of the unknown often make the moviegoing experience a genuinely scary one. The new B-movie thriller Out of the Dark has more of these elements and then some and while it isn’t of the utmost quality, it does offer some rather decent shocks and some pretty solid performances from it lead actors. Set and filmed in Colombia, it is an average spookfest that is good for a momentary chill but other than that, it’s just low grade thriller that doesn’t have much to offer other than fine acting.

Out of the Dark begins 20 years prior in a large Colombian house inhabited by the local paper mill doctor. This doctor has a medical secret concerning many of the local children. As his secret soon gets the best of him, he tries to destroy the medical files. However, before he can do so, a mysterious force ends his life. Fast forward to present day where Sara (Julia Stiles), Paul (Scott Speedman) and their young daughter Hanna (Pixie Davies) are now moving into the house where the doctor previously lived. Sara has taken a job at the same paper mill, which is actually owned by her father Jordan (Stephen Rea). All seems fine however, until the same mysterious forces from 20 years ago reappear and begin to torment Sara, Paul and especially little Hanna.

While Out of the Dark isn’t a cinematic masterpiece, the acting is actually rather good. Julia Stiles has shed her teenage romantic comedy persona and stepped into a more mature role here, that of a concerned mother who wants nothing more than the safety of her haunted daughter. Stiles has a presence that few actresses possess and it is really quite refreshing to watch. Scott Speedman is also rather strong here as a sensitive yet slightly macho dad also trying to make sense of things. But the real star here is Pixie Davies, who plays the frightened little girl expertly well. Seasoned thespian Stephen Rea also turns in a meaty performance as the shadowy businessman and grandfather of Hanna.

Movies like Out of the Dark come and go. They are made for a quick buck and don’t have any real artistic merit. This film is in theaters now in a limited run and I stress the word “limited” because it’s not a real crowd-pleaser. It will most likely end up on Netflix Instant as a late night thriller choice and that’s okay because that is the film’s true destiny. See this film only if you are interested in seeing the actors in it give relatively decent performances. The sets are limited but they work. The film’s story can be a little disturbing but there is very little blood and violence. Out of the Dark relies heavily on atmospheric tension and shadows popping out at you. Other than that, it’s just a standard by-the-number ghost horror/thriller.