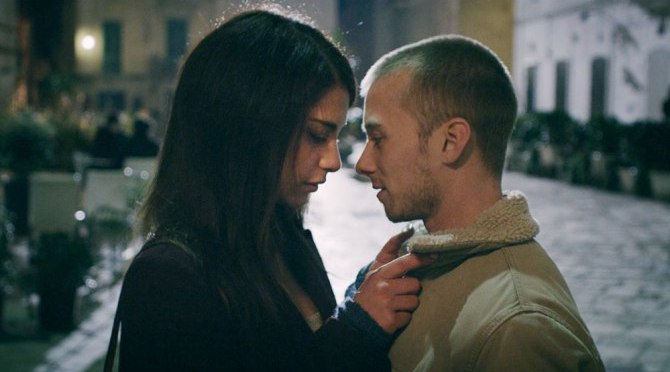 Horror and romance are two film genres that don’t typically mix. They are quite possibly the two most different genres and on the surface, should not combine. However, when a story comes along like the one in the dark indie Spring, all bets are off and audiences are in for a movie experience unlike any other. The premise in this film has been done before in similar fashion, yes. But the manner in which it is presented here is really rather unique. The complexities of romance and the horror of monsters are brought together and the results are unlike anything you’ve probably ever seen.

Spring focuses on Evan (Lou Taylor Pucci), a young American man who is in a real tight spot. His mother has just passed away, he’s been fired from his job and he is now wanted by the police. With his options low, he decides to board a place and fly to Italy. In an attempt to run away from his miserable existence and start a new life, he soon explores the beauty of a foreign land. His journey eventually leads him to Louise (Nadia Hilker), a sexy young woman with demons of her own, some of which are more terrifying than anyone (including Evan) can possibly imagine.

With its strong independent feel and its gritty filmmaking style, Spring is a daring cinematic experiment. The romantic elements are a tad cliche but they work here given the fresh faces and strong acting chops of Lou Taylor Pucci (Evil Dead, Carriers) and Nadia Hilker (Zimmer mit Tante, Die Route). With Pucci’s straight-laced Evan mingling with Hilker’s sexy European Louise, all bets are off and viewers are in for not only a steamy relationship but one riddled with mystery and posing many dark questions.

Writer/directors Justin Benson and Aaron Moorehead (Resolution, V/H/S: Viral) have really put together an interesting film with Spring. Without giving the big surprise away, one must go in truly expecting the unexpected. The shaky camera and stunning Italian locale both add to the film’s high level of quality and originality. The script is tight and provides for some very honest moments. Pucci and Hilker are pure magic together and their recitation of the dialogue reinforces that fact. Each scene they share is absolute gold and you won’t want to take your eyes off of the screen.

With a story that is not only unorthodox but at times, downright frightening, Spring is a film that can’t be watched. It needs to be experienced. In a daring attempt at blending horror and romance, Justin Benson and Aaron Moorehead have treated their sophomore film effort (their first being 2012’s Resolution) with the care and attention of budding auteurs. The big reveal in this movie will shock you to the bone and will undoubtedly leave an everlasting impression. Spring may be a humble little indie but it has the massive potential of becoming a cult classic. Audiences who desire thought-provoking and beautiful filmmaking should take note and consider giving Spring a try because it is definitely one of a kind and chockfull of memorable visuals and high caliber performances.