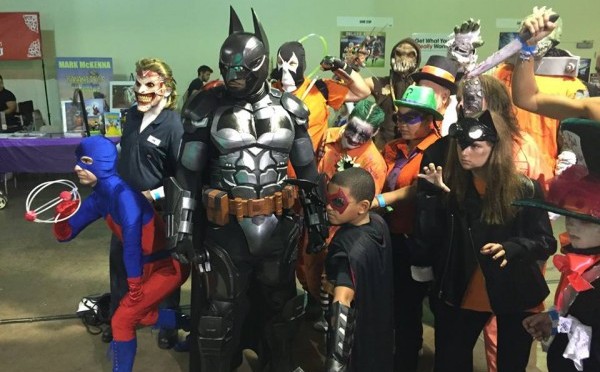 We all wear masks in one way or another. Some masks may be part of an elaborate costume and other masks are emotional and invisible to the naked eye. Either way, people tend to hide from life and the mask and costume serve that function. You can say cosplayers do the same thing and they do but their purpose is one inspired by entertainment and flashy fun. In case you aren’t familiar with cosplaying, then let me enlighten you. To “cosplay” is to don a costume or disguise (usually that of a character from fiction) and act out or at least strut around… Much like Halloween. However, unlike Halloween, cosplayers are often drawn to other cosplayers, similarly minded individuals who congregate, pose for photos and basically just have a good time. I was at Hartford Con recently and the cosplaying spirit was alive and well with many of the con’s attendees. It was indeed, quite a time.

Comic cons are the perfect environment for the serious or not so serious cosplayer. These costumes can range from simple superheroes to obscure pop culture references from yesteryear. Many con-goers range from their 20s-40s and the cosplaying garb they possess usually reflects the time period in which they grew up. For instance, a child growing up in the 90s (like myself) would most likely wear a Batman costume, a Teenage Mutant Ninja Turtle getup or a Ghostbusters uniform. The last option actually rings true with me as I will soon be entering the cosplay-ground as I bust ghosts and pose for photos with my fellow Ghostbusting compadres.

While it’s fun and to some, may seem a tad juvenile, cosplaying is a pretty serious hobby. In some instances, people pour quite a bit of money into their costumes and if they pull it off right, many a photo will be taken and they will be responsible for some of the con’s greatest moments and their audiences’ greatest memories. Hartford Con this year saw a fantastic Groot from Guardians of the Galaxy, the crew from The A-Team, Ninja Turtles villains Bebop and Rocksteady, a huge collection of Marvel and DC heroes and villains and the most random of the lot: Van Pelt, the evil hunter from Jumanji!

Halloween is quickly becoming second banana to comic cons which house a great many costumers. New York Comic Con is next week and with thousands of attendees gracing the Jacob Javitz Convention Center every year, 2015 should see a bevy if not an increase in cosplayers. The philosophy of cosplaying isn’t just putting on a costume, it’s actually taking on a temporary identity. It’s a fun activity for those who embrace their nostalgia and their vivid imagination. If you want to express yourself in a unique way, then pick a character, dress up like them and be prepared to see some smiles because cosplaying is an act of generating pure joy.