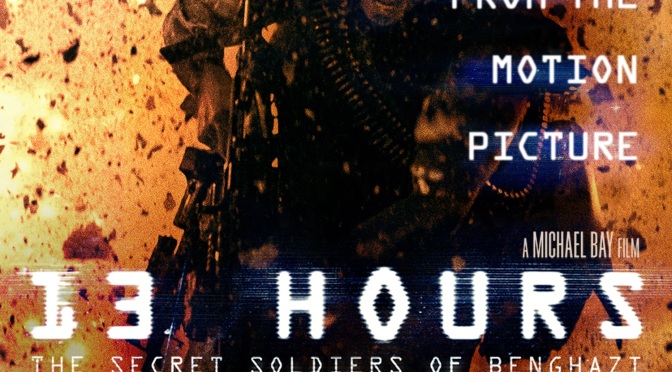 Remote Control Productions is a company run by film music genius Hans Zimmer and employed there, are some of the greatest musical minds working today. This group of composers and musicians currently supplies Hollywood productions with many of their scores. Lorne Balfe is one such individual and in recent years, he has contributed a good amount of said scores. He has worked on Batman Begins, the Kung Fu Panda films, and Sherlock Holmes, just to name a few. His latest effort is 13 Hours: The Secret Soldiers of Benghazi, a gritty actioner based on real events and directed by action “auteur” Michael Bay. The score is not only hard-hitting at times for a militaristic thriller but it contains tender moments that perfectly capture the effect war has on one’s mental wellbeing.

13 Hours tells the harrowing true story of six brave men who, part of a security team, defend a U.S. diplomatic building in Benghazi, Libya when terrorist attacks rip through the area. This unfortunate series of events took place on September 11, 2012 and has been called the “Battle of Benghazi”. The American security agents risked their lives in protecting the freedom of their homeland. The action in the film is fierce and the raw reality is forever present. The film stars John Krasinski, Pablo Schreiber, and James Badge Dale, to name a few. Michael Bay’s unique visual style is alive and well and reminds one of his 1996 militaristic thrill ride The Rock and dare I even say, 1998’s Armageddon.

The score to 13 Hours is without a doubt one of the film’s best features and Lorne Balfe certainly knows what he’s doing here. Things start off with a noble theme in track 1 “Hero”. Track 2 “Welcome to Benghazi” goes a little deeper with some Jason Bourne-like electronic tension. Track 4 “Burn Them Out” is a harsh Hans Zimmer-like piece that starts and stops nicely, very militaristic. We then get the complete opposite in Track 6 “Calling Home”, a tender piano cue that ends on a twinkly note.

Track 6 “Engage Direct” continues in the action-packed Michael Bay tradition and track 7 “The Last Resort” is pure Bay with a patriotic opening that conjures up images of a tattered American flag waving in the dim sunlight. This track is actually very reminiscent of fellow Remote Control composer and occasional Bay-collaborator Steve Jablonsky. There is more Zimmer-ness in track 10 “Forgotten”, which brings back the tender piano motif and piles on some strings, very Thin Red Line. We get some positivity in track 12 “Going Home”, with a strong buildup bringing the piano theme to a nice point. The album closes with track 13 “13 Hours” with a somber cue which sums up the film and score perfectly, action-packed but full of sadness and tender moments.

With Lorne Balfe’s resume growing each and every year and the man’s musical style shifting and adapting to almost every film genre, Hans Zimmer has done a fantastic job in influencing and pushing this gifted composer to great heights. Remote Control Productions is the breeding ground for today’s strong film music talent and Balfe is one of its shining pupils. 13 Hours: The Secret Soldiers of Benghazi is truly an impressive work and I, for one, can’t wait to hear what Mr. Balfe has in store for us next.