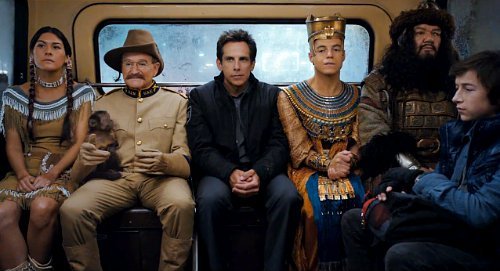 In 2006, the world was introduced to the Night at the Museum film series, a cinematic adaptation of Milan Trenc’s 1993 children’s book of the same name. The film focused on Larry Daley (Ben Stiller) and his adventures as a night security guard at New York’s Museum of Natural History. A magical artifact eventually causes the exhibits to come alive and it is then up to Larry to basically survive the night. A sequel, Battle of the Smithsonian was released in 2009 and it continued the plot with Larry trying to survive another night, this time in Washington, D.C.’s famed Smithsonian Institution. A third and final installment, Secret of the Tomb, will be released this year during the holiday season, so the whole family can enjoy one final museum adventure with Larry and the gang.

END_OF_DOCUMENT_TOKEN_TO_BE_REPLACED

Mental illness is something covered in film pretty extensively. The human mind is so complex that those who are considered “insane” provides for some of the very best of cinema. The new thriller Stonehearst Asylum tackles the subject of insanity in a very dark and at times, disturbing way. The film has a fantastic cast and a gritty feel and originality that few thrillers these days possess. That originally, however, stems from Edgar Allan Poe whose short story The System of Doctor Tarr and Professor Fether serves as Stonehearst Asylum’s primary inspiration.