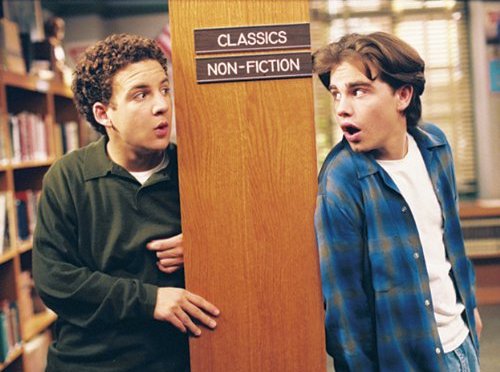 If you were lucky enough to grow up in the 90’s, you were probably an avid Boy Meets World watcher. Part of ABC’s TGIF lineup, Boy Meets World was a successful family sitcom that ran for seven seasons. It chronicled the life and times of Cory Matthews, a young man from Philadelphia, who throughout the series run, grew up from a pre-teen to a college adult. Lionsgate Home Entertainment has been kind enough to release season four on DVD causing fans of the now classic show to rejoice.

Season four contains a lovely balance of humor and drama. Each episode has something important to say while providing many chuckles along the way. Things start off with Cory and his brother Eric completing a summer road trip. Eric wants to make one last stop. Thinking it’s better than home, he plans to stay there forever. This is just the first of many serious issues presented in Boy Meets World: The Complete Fourth Season.

Other issues introduced throughout the season include physical beauty versus inner beauty, career decisions, poverty, broken families, sickness, death, child abuse, acceptance, class differences, the mob, sex, parenthood, and cults. But the most important and probably the most famous episode is A Long Walk to Pittsburgh. This is the heartbreaking episode where Cory’s girlfriend, Topanga is forced to move away with her family and the strain it makes on the couple’s relationship. Together, they must try to convince their families that their love is too strong to keep them apart. I must admit, even after 13 years, this episode still makes me emotional.

is truly a 90s gem. The acting is wonderful. Ben Savage is great as the show’s main character, Cory Matthews, the boy who meets the world. He is neurotic and sensitive, hysterical, and endearing. His oblivious best friend Shawn Hunter is played by Rider Strong and Danielle Fishel plays his beautiful girlfriend, Topanga Lawrence. Will Friedle plays his goofball brother Eric, and William Daniels adds a touch of class to the ensemble as the teenagers’ teacher and voice of reason, Mr. Feeney.

The writing in each episode is terrific. There are tales of strong human drama as well as stories that feature silly teenage high jinks. Each actor delivers their lines with sincerity whether it is serious or comical and no matter what the episode is about, there is always a moral or life lesson to be learned usually offered by the wise Mr. Feeney.

Boy Meets World ran for a respectable seven seasons on ABC and is currently in syndication on ABC Family. The first three seasons were released on DVD in 2004 and 2005 however sales didn’t do so well so season four’s release was put on hold. Fortunately for us fans, Lionsgate Home Entertainment acquired the rights to the series and released the first three seasons as Lionsgate DVDs as well as the sought after season four.

This is a show that many (including yours truly) look back on with fond memories. It was a staple of ABC’s TGIF lineup and was responsible for providing a very entertaining Friday night every week. As children, we would look forward to the upcoming adventures of Cory, Shawn, Topanga, Eric, and Mr. Feeney. In Boy Meets World: The Complete Fourth Season, we see the crew develop from immature high school kids to mature college bound youths. They grew up right before our very eyes every week. They just don’t make TV shows like this anymore. Thankfully, we have the DVDs to comfort us.

Sadly there are none.