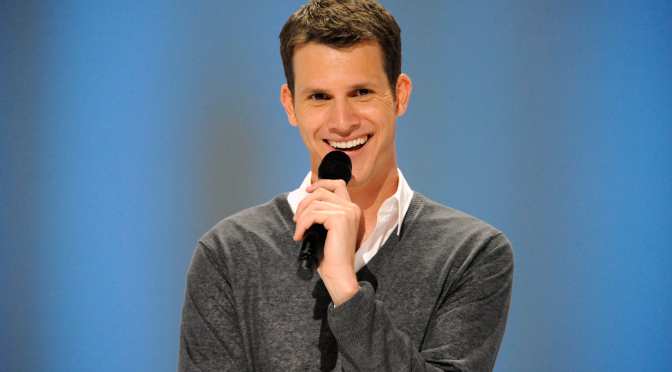 In the past few years Daniel Tosh has established himself as a very talented comedian. From his various stand up sets to his acclaimed Comedy Central program Tosh.0, he definitely knows how to tickle one’s funny bone. Fans of the cynical comic are certainly in for a treat with his latest performanceHappy Thoughts now out on DVD. This marks the sarcastic humorist’s third special.

Filmed in San Francisco, Happy Thoughts is a more than adequate platform for Tosh to dump on pretty much everyone and everything. He is politically incorrect and knows how offensive he is. He starts things off appropriately by insulting his host city. He then informs the audience that he’s not good performing live hinting that he fares better onTosh.0. He then dispenses jokes about random subjects starting with illegal immigration, jury duty, stereotypes and the law.

Tosh then talks about his girlfriend, how she worries about him getting shot on stage, hangnails and getting ready to go out at night. He then goes into this bit about sitting on the toilet reverse and flat ironing his pubic hair. He then fantasizes about David Beckham and Brad Pitt having a child together and how beautiful that baby would be. He then goes into extremely inappropriate territory by talking about having sex with babies. He then rants about gay marriage, the Amish, Snuggies, the economy and the elderly.

The topic then switches to sports. Tosh talks about Brett Favre for a bit. He then segue ways into how he gave a commencement speech at a high school. He delves into people’s stupidity and Parkinson’s disease. He discusses Chris Brown, domestic violence and cheating on women. Tiger Woods and Jesse James are then mentioned. Tosh then insults people with tattoos. He also bashes the Winter Olympics and the national anthem. He then talks about troubled athletes such as Michael Phelps and Kobe Bryant. He badmouths The Black Eyed Peas and Fergie. He then dispenses a somewhat interesting but ultimately pointless fact about kangaroos. He follows this up by stating that he should write Snapple facts.

Tosh continues to mock people, places and things throughout the show like Johnny Depp who is in his late 40s and feels the need to accessorize. He then talks about the show Interventionand has an amusing little bit on alternate endings to movies. He talks about death, practical jokes, one of which he played on his sister. He discusses the weather, Febrezing homeless people, abortion and the octomom. Tosh then rants a bit on wearing condoms and compares them to picking up dog excrement. He then jokes about Presidents Barack Obama and George W. Bush and finally wraps things up by talking about dog shows, fat people, ugly people, planes and working.

It is quite obvious that Daniel Tosh is up there as one of today’s best comics. His timing is great and his material is fresh and original. Along with his show Tosh.0 he certainly knows how to draw in an audience that is both hip and eager to laugh. He is a smart man who manages to entertain while at the same time repelling many people. Daniel Tosh is an honest performer who takes risks and doesn’t care who gets hurt in the process. Happy Thoughts is an absolute gem.

The bonus features for Daniel Tosh: Happy Thoughts are pretty good. There is the Comedy Central aired version of Tosh’s set. There is a very funny encore where Tosh rambles about the stage’s appearance. He then starts walking around the auditorium up and down the aisles where the audience is sitting making humorous comments along the way. There is a featurette entitled A Day in the Life and it is basically a behind-the-scenes look at the filming of an episode of Tosh.0. The opening acts are also included in the bonus features. Both comedians Jasper Redd and Matt Fulchiron are relatively unknown and relatively unfunny.