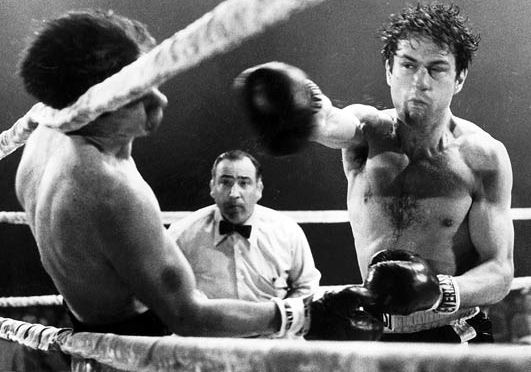 Martin Scorsese and Robert De Niro have enjoyed an extraordinary working relationship for over four decades. Their collaborations have resulted in some of cinema history’s greatest works. Raging Bull is among them and the 30th anniversary edition of the landmark film is now out on Blu-ray and DVD. Released in 1980, this compelling true story of middleweight boxing champ Jake LaMotta chronicles the fighter’s rise and fall from grace, his troubled personal relationships and his dark inner demons. Robert De Niro won his second Oscar for portraying this fascinating individual.

The story of Raging Bull revolves around LaMotta, an aggressive mentally unstable boxer who doesn’t just fight in the ring but out of it too. He has a strained marriage which he eventually leaves to pursue a beautiful local girl named Vickie played wonderfully by then newcomer Cathy Moriarty. He has a brother Joey played by another newcomer at the time Joe Pesci. Joey is Jake’s closest friend and confidante. He looks out for him and he also has Mafia connections.

Throughout the course of the film LaMotta battles everyone and everything. He has a thirst for violence and satisfies this urge in every boxing match. He also fights Vickie and Joey in an attempt to feel powerful and superior. He is a truly disturbed person and we get an excellent glimpse of his turbulent life.

In the film, Robert De Niro is Jake LaMotta. There’s no question about it. They are one in the same. De Niro trained rigorously to emulate LaMotta’s physique and fighting style. He also gained a good 60 pounds to depict LaMotta in his later years. De Niro was so convincing as “The Bronx Bull” that he won the Academy Award for Best Actor in a Leading Role that year.

Though De Niro is superb in the movie, we mustn’t forget the fabulous supporting acting of Joe Pesci and Cathy Moriarty. Both relatively unknown at the time, these two actors served as the perfect foil for LaMotta’s unbridled rage. Joey isn’t as aggressive as his brother. He is more reserved and serves as the films voice of reason. Pesci plays the role of Joey sympathetically and realistically. Raging Bull would serve as the actor’s first collaboration with Martin Scorsese. He would later go on to portray vicious mobsters in Goodfellas and Casino. Cathy Moriarty was only about 19 years-old when she played the role of Vickie. An attractive and talented actress, Moriarty showed audiences that she wasn’t just some abused housewife. She was actually a strong confident young woman who didn’t want to take any more crap from LaMotta.

One of the other many terrific elements of Raging Bull is its editing. The scenes in the boxing ring are so realistic. They were shot in an almost first person like perspective. It actually feels like you’re in the ring. The sound in the film is also pretty amazing. Each punch and the sound of the crowd seem to leap out of the speakers and into your ear canal stimulating your sense of hearing.

Though the film was shot in black and white, there is nothing dull about it. In fact there is more color in this film than there is in most films shot in color. The color in Raging Bull comes in the form of precision direction, incredible acting and genius editing. This is one of the greatest movies ever made, the greatest boxing movie ever made and one of Scorsese and De Niro’s absolute best. Now celebrating its 30th anniversary, Raging Bull on Blu-ray and DVD is a surefire knock out and a downright winner.

The bonus features for Raging Bull: 30th Anniversary Edition are very good. There are three feature-length audio commentaries by director Martin Scorsese, editor Thelma Schoonmaker, various other members of the cast and crew and storytellers. There are four new featurettes for this Blu-ray edition. They are “Marty and Bobby”, “Raging Bull: Reflections on a Classic”, “Remembering Jake and Marty on Film”. There is an interview with Cathy Moriarty on The Tonight Show Starring Johnny Carson which aired March 27, 1981. There is a four-part feature-length documentary entitled Raging Bull: Fight Night. There is a behind-the-scenes featurette called “The Bronx Bull”. There is De Niro vs. LaMotta, a shot-by-shot comparison in the ring and finally there’s vintage newsreel footage entitled “LaMotta Defends Title”.