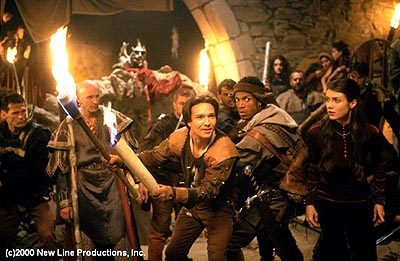 There are a lot of bad movies out there. Some are bad and some are just plain awful. Dungeons & Dragons and its made-for-DVD sequel D&D: Wrath of the Dragon God fall under this category. Both films based on the popular fantasy role-playing game of the same name have now been released in a Blu-ray 2-movie pack. Joy.

The first movie D&D takes place in the mythical Empire of Izmer, a place where two classes of people inhabit the land, Mages and commoners. The Mages possess special magical powers and the commoners live in poverty and often resort to crime. An over the top Jeremy Irons stars as an evil Mage named Profion who plans to dethrone the ruler of the land Empress Savina played by a wooden Thora Birch. Aware of Profion’s sinister plot, Savina must obtain the Rod of Savrille, a powerful scepter which controls dragons. Meanwhile common thieves Ridley (Justin Whalin) and Snails (Marlon Wayans) accidentally become involved in Savina’s quest when they break into a magic school and agree to locate the scepter so that they won’t get into trouble. Eventually Profion and his army, led by Damodar (Bruce Payne) try to hunt down Ridley and his friends so that he may one day rule Izmer.

The acting in D&D is absolutely terrible. Jeremy Irons shouts his lines like a maniac, Thora Birch has almost no emotion and Marlon Wayans runs around spitting out unfunny one-liners. The direction is also weak, the special effects are lame and the dialogue is a joke.

The second movie D&D: Wrath of the Dragon God was released straight to DVD because its predecessor didn’t perform too well at the box office. Why it was even made in the first place is beyond me. Wrath of the Dragon God continues the story a couple of hundred years after the first film and even brings back the villainous character of Damodar who is once again played by Bruce Payne. Damodar obtains a black orb which has power over a dragon god. The rulers of Izmer soon learn of Damodar’s evil power and enlist the help of Berek (Mark Dymond), a warrior and former captain of the king’s guard. Berek then assembles a group of four individuals each with unique talents and skills necessary to battle Damodar’s evil. These heroes include Lux, a strong female fighter, Dorian, a wise cleric with divine magical powers, Ormaline, a female elf wizard and Nim a sneaky rogue who shows intelligence and cleverness. It is then up to Berek and these four champions to save Izmer from certain doom.

Like the first D&D, Wrath of the Dragon God is also pretty bad. The acting is ridiculous, the special effects are atrocious, the direction is poor and the writing is below par. There really isn’t anything good about this sequel.

It really is a shame that such a popular game such as D&D was adapted for film so miserably. Believe me, buying the D&D: 2-Movie Collection is a total waste of money. If you want to watch a fantasy film that isn’t total garbage then I suggest you get one of the Harry Potter’s, Lord of the Rings, or Willow because they are of much higher quality. D&D is a major disappointment.

The bonus features for D&D include a behind the story menu which includes two feature-length audio commentaries, one with director-producer Courtney Solomon, actor Justin Whalin and game co-creator Dave Arneson and the other with Solomon, director of photography Doug Milsome and Arneson. There are two documentaries. The first one is called Let the Games Begin – A Profile and History of Adventure Gaming and the second one is called The Making of Dungeons & Dragons. There are special effects deconstructions of four different scenes. There are eleven deleted scenes and a theatrical trailer for the film.

The bonus features for D&D: Wrath of the Dragon God include a feature-length audio commentary by Edward Stark (Wizards of the Coast D&D Special Projects Manager) and actors Dawn Akemi and John Frank Rosenblum. There are two documentaries. The first one is called Rolling the Dice – Adapting the Game to the Screen and the second one is called The Arc – A Conversation with Gary Gygax (co-creator of D&D).