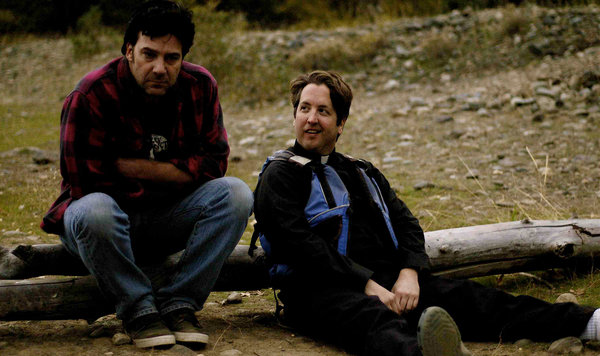 Every now and then, a movie comes along that blurs genres, contains truly bizarre scenes and may manage to offend certain religious and ethnic groups. The movie I’m referring to is entitled The Catechism Cataclysm and it is a very odd indie/road/horror/comedy that is certain to offend if not entertain audiences. This strange little film is now out on DVD and if you want to absorb 81 minutes of absolute insanity, then I recommend giving this peculiar flick a whirl.

Meet Father Billy Smoorster (Steve Little), an immature and socially awkward priest who seems unsure of which path to take in life. He tells funny stories at Bible study which have little to do with the Bible and he surfs YouTube for funny videos. Billy’s superior sees that he needs to find his way so he makes Billy take a short vacation. Not wanting to go alone, Billy contacts an old acquaintance from high school Robbie Shoemaker (Robert Longstreet), a guy Billy was obsessed with during and after high school. To Billy, Robbie was the personification of cool simply because he was in a band. Billy then invites his idol on a canoe trip and after a bit of resistance, Robbie eventually agrees.

The majority of the film shows Billy and Robbie embarking on their trip of male bonding. They drink and talk and share stories. It’s all rather touching until they encounter three other canoe-travelers. These mysterious adventurers include two attractive young Japanese girls and a rather large man who doesn’t talk. Billy and Robbie make camp with them and then the real craziness begins.

The Catechism Cataclysm is wonderfully absurd. One of the contributing factors to the absurdity is Steve Little’s (Eastbound & Down) portrayal of Father Billy. This is a character who has never gotten drunk before, he lives in the past and he doesn’t know where he wants to go in life. He is a man-child who may seem retarded but he is simply stuck in an existential ditch. Robbie played by Robert Longstreet (Pineapple Express) couldn’t care less about Billy. He doesn’t even remember him but after a few hours of conversing and what-have-you, the two characters connect.

The chemistry between Little and Longstreet is truly wonderful. The scenes of them on the water are both funny and heartwarming. I was reminded of City Slickers, a much more awkward and confused City Slickers. If the film followed in this road/buddy/comedic path, then it might have become somewhat lame and predicable but instead it goes to a much darker and twisted place.

Writer/director Todd Rohal (The Guatemalan Handshake) has taken us on a wild and crazy ride here. Think City Slickers on acid and you have this warped little gem. The Catechism Cataclysm has profanity, alcohol, loud music and violence, all the things certain to offend and with Father Billy being a man of the cloth, expect buckets of blasphemy.

With a tongue-twisting title, Steve Little’s ridiculousness and over-the-top violence, The Catechism Cataclysm is certain to become something of a cult classic. Little is a talented comedic actor and with Eastbound & Down propelling him into stardom and future roles on the way, he just might make it into Hollywood’s A-list, definitely the B-list. Robert Longstreet is also rather talented. His grumpy portrayal of Robbie is both hysterical and endearing. One can only hope that these two actors gain more exposure. They have a small film here with The Catechism Cataclysm but the future is looking rather promising for both actors. Check out The Catechism Cataclysm and you just might be pleasantly surprised.

The bonus features for The Catechism Cataclysm are pretty decent. There is a truly odd and lackluster video called Sasquatch Birth Journal 2. There are outtakes, a trailer for the film (English and Japanese) and lastly, an amusing feature-length audio commentary track with Todd Rohal, Steve Little and Robert Longstreet.