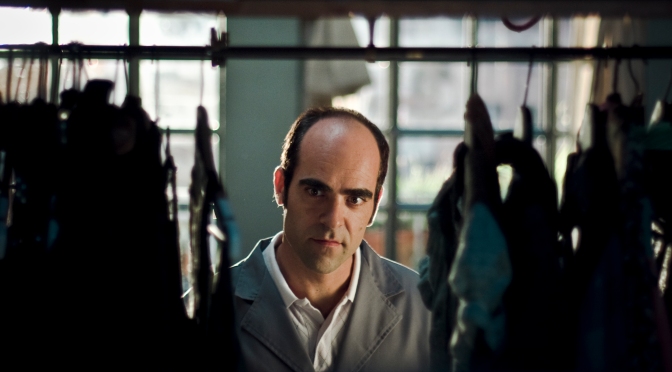 Suspenseful thrillers used to be engaging, thought-provoking and well, suspenseful. Films of this genre have been pretty lackluster as of late except for one such gem that’s slipped through the cracks. That film is the Spanish Sleep Tight, a twisted tale that manages to scare, shock and mesmerize all in the course of its 101 minutes.

Cesar (Luis Tosar) is the concierge of an apartment building in Barcelona. He is a truly disturbed individual who believes that he has the inability to be happy. He wants everyone around him to be miserable and does so in subtle and quiet ways. He is obsessed with one tenant Clara (Marta Etura) and since she is so happy-go-lucky, he is determined to make her as miserable as he by creeping into her life.

Sleep Tight is a bizarre Spanish film which takes “obsession” to a new level. The character of Cesar possesses a warped yet fascinating psyche. There are many layers to his personality and the audience sees just how deep he’ll go in his descent into madness. Luis Tosar (Miami Vice) is a talented actor who mirrors Anthony Hopkins in Silence of the Lambs. The attractive Marta Etura (The Impossible) is also pretty good in the film and is a real natural in front of the camera. Quality thrillers are hard to come by these days but Sleep Tight is proof that there’s hope for the genre even if it’s in Spanish.

The bonus features for Sleep Tight are pretty slim. There is a behind-the-scenes featurette entitled Sleep Tight: Cesar’s World and there is a trailer for the film.