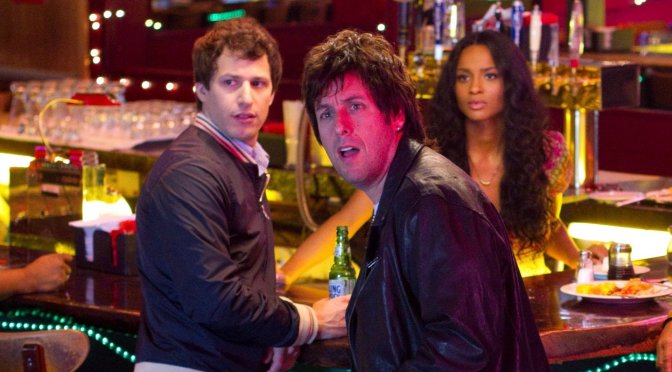 Over the years, Adam Sandler has established himself as a strong comedic talent. From his early days at Saturday Night Live to his numerous drug/sex films, the man is basically Hollywood royalty. His latest film, That’s My Boy follows the standard Sandler formula, containing gross-out humor, nudity, substance abuse and over-the-top goofball characters. Sandler’s production company, Happy Madison has been cranking out this type of lowbrow tripe since 1999. Sometimes they get lucky and manage to squeeze out a watchable film but unfortunately, That’s My Boy isn’t one of them.

The film begins in 1984 and follows lamebrain teenager Donny Berger, absentminded and obsessed with sex. He lands himself in detention one day and manages to have intercourse with his hot teacher. The teacher gets pregnant, goes to prison and Donny becomes a teenage celebrity. Flash forward to today where Donny (Adam Sandler) is now a washed up lamebrain, owing the IRS $43,000. If he doesn’t come up with the money, he will go to jail for three years. Donny then comes up with a plan to go see his son, Todd (Andy Samberg) and try and get the money he owes from him.

With a beer in his hand in basically every scene, a crude sense of humor and sleaze which know no bounds, Donny Berger is in every way imaginable, a douchebag. He hasn’t seen his son in years and when he did see Todd, he was a lousy father. Todd has now moved away form Donny’s moronic behavior. He is successful and is getting married to a beautiful girl (Leighton Meester). Donny crashes his way into Todd’s perfect life just when he was certain that Donny would be long gone from his happy existence.

Like all Happy Madison productions, That’s My Boy is filled with ridiculousness all throughout. There is alcohol and drug consumption, nudity, toilet humor and stupidity all throughout. For some reason, Sandler thinks that audiences actually enjoy this stuff and sadly, the youth of America is eating up this garbage like its ice cream. There was a time when comedies were funny. Sandler used to be funny. Ever since Click in 2006, the man just keeps putting out trash.

Andy Samberg, though a pretty funny guy on SNL, his performance in this movie is somewhat lacking and though, while the man’s acting isn’t great, you can still sense that he has a dash of charisma. The script for That’s My Boy is pretty bad so that may be the reason as to why the actors don’t seem very talented. A bad script can bring down an entire movie, actors included. Hopefully, Samberg’s next film (if he makes one) will be significantly better than this one.

As with all Happy Madison films, That’s My Boy follows a character who is searching for answers and eager to make a connection. Donny wasn’t a good father. He knows this. He just wants to see his son to make amends. Other than that tender purpose, Donny just wants to have a good time. He achieves this by drinking lots of beer, socializing with Todd’s fiance’s family and making Todd feel really uncomfortable.

The father-son aspect of That’s My Boy is a pretty special one but with the majority of the scenes containing a bunch of people having sex, drinking and drugging, that special aspect pretty much fades away. Another thing that audiences might find annoying is Sandler’s idiotic voice, truly, truly irritating.

That’s My Boy is as typical a raunch fest as it gets. Sandler has no shame when it comes to unleashing his juvenile comedic style onto audiences all over the world. Andy Samberg isn’t any better than Sandler as he has left Saturday Night Live for more “artistic” endeavors. He is literally following in Sandler’s footsteps and it is somewhat sad. Sure, Sandler has had a couple of hits since he left Lorne Michael’s watchful eye but it is unfortunate how many more misses he has made over that time.