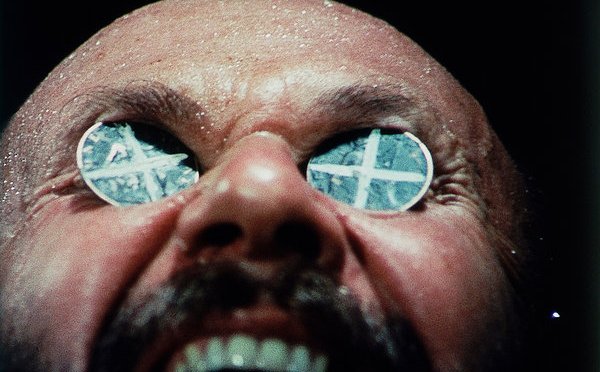 The Australian Outback is known to be tough, rugged and inhospitable. This is a harsh reality made very clear in Director Ted Kotcheff’s gritty 1971 drama Wake in Fright, a strange film recently restored in a new 35mm print. The film takes an average Joe and puts him through a crazy ordeal of alcoholism, violence and mild homoeroticism. The story follows young and dashing schoolteacher John Grant (Gary Bond) who has taken a post in the Australian Outback. He plans to go to Sydney to visit his girlfriend but in order to do that, he must catch a flight from the middle-of-nowhere mining town Bundanyabba or known by the locals simply as “The Yabba”. Once there, John encounters a slew of colorful characters, most of whom find a passion for drinking copious amounts of beer, gambling and brawling.

Canadian director Ted Kotcheff (First Blood,Weekend at Bernie’s) has captured the raw, somewhat brutal essence of the Australian Outback. The shots of both the desert and interior scenes are done very well, showing the audience just how rough the settings are, mirroring certain characters’ personalities. Throughout the film, John meets a bunch of random drunks. The first one is Jock Crawford, the local sheriff played by famous Aussie character actor Chips Rafferty (in his final film role.) Next is Tim Hynes (Al Thomas), a local resident who invites John into his home. Then, there is “Doc” Tydon (Donald Pleasence), a self-proclaimed alcoholic who is the most intense and somewhat disturbed. Living in a shack, drinking day and night will probably do that to a person.

John hangs out with “Doc” and two other hard-drinking chaps, Dick (Jack Thompson) and Joe (Peter Whittle). The four men consume buckets of alcohol, play-fight and go on a wild kangaroo hunt. John isn’t used to all this manly madness, so he sort of gets lost mentally. His original mission was to fly back to Sydney to be with his girlfriend but his priorities got somewhat mixed up and he is now blinded by intoxication.

Wake in Fright is a weird film, without a doubt. The theme of “being lost” is explored fully through John’s behavior. He isn’t exactly lost geographically, but he is emotionally. His time in “The Yabba” allows him to get lost even further. Gary Bond gives a powerful performance and his character’s actions throughout the film are evident of a man slowly losing his mind. He needs help and the only form of help he’s getting is in the form of overly friendly natives who basically pour beer down his throat. John goes along with this sick form of hospitality and the results are very unpleasant.

The story of Wake in Fright’s restoration is a rather interesting one. The original print was found after a 10-year search in Pittsburgh. The National Film and Sound Archives of Australia restored the film and the results are rather terrific. Evan Jones wrote the screenplay which is based on Kenneth Cook’s novel. The dialogue is very realistic and harsh much like film’s setting.

Australian cinema is a curious thing. It’s either hit or miss. Wake in Fright falls in between. It has moments of cinematic genius but sadly, there are moments of absolute pointlessness. It is a film that lacks a clear purpose but that is it’s purpose; to have none. John Grant is a man who has lost direction. The film is the same way. The “fright” that John “wakes” up to is somewhat interesting. It’s not overwhelmingly interesting but it is watchable. If you want to see a film about a man reaching his limits, Wake in Fright is your film. However, there are much better films out there to quench your thirst of seeing people find themselves.