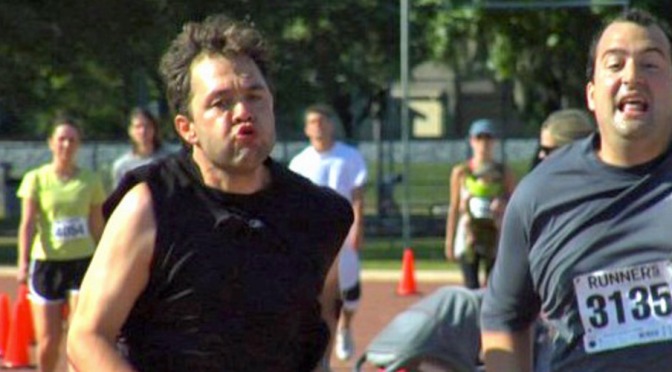 Sibling rivalry is very common in families. Brothers and sisters play, fight or both to try and best one another to declare absolute superiority. This age-old phenomenon of kids competing to eventually be declared “better” is a truly fascinating thing and in Jay and Mark Duplass’ independent dramedy The Do-Deca-Pentathlon, actors Mark Kelly and Steve Zissis battle 20 years after they finished competing which ended in a tie. On September 27, The Museum of the Moving Image held a very special screening of the film followed by a Q&A session with Kelly, Zissis and one of the writers/directors Jay Duplass.

Brothers Mark (Steve Zissis) and Jeremy (Kelly) have been distant in recent times. They usually but heads and spew hurtful things at one another. This is due in large part to the fact they have some unfinished business. That unfinished business is the “Do-Deca-Pentathlon”, a sort of mini Olympics that the two brothers competed in when they were younger. The games were ridiculous, consisting of ping pong, arm wrestling and holding one’s breath under water. Mark and Jeremy ended the games in a tie, only to settle the score two decades later when Jeremy comes to visit Mark’s home.

The ridiculousness of The Do-Deca-Pentathlon is taken very seriously by the characters in the film. Mark is depressed and annoyed by his free spirit brother and the two man-children engage in an endless battle to see who is the true victor. The film is a hilarious comedy but there are moments of seriousness and tenderness. Mark’s family life is in slight disarray, his son likes Jeremy more than him and his wife is fed up with the secret games he and his brother are playing.

The acting in the film is stellar and everyone involved has huge talent. Zissis (Jeff, Who Lives at Home) plays Mark with just the right amount of melancholy. His seriousness and flat affect make him seem disturbed and these characteristics are just so funny. Mark Kelly (Mad Men) is another star in the film and his portrayal of Jeremy is also hilarious. Kelly resembles a young Russell Crowe and he is just outstanding in his comedic role. The film really focuses on the two men competing and trying to establish who is the champion. Their battle is wonderful to watch, humorous and at times, sort of heartbreaking.

Brothers themselves, Jay and Mark Duplass have put together a bittersweet film here, a film which focuses on the difficulties of brotherhood and the warmth and tenderness of family life. Their previous films Jeff, Who Lives at Home and Cyrus also deal with family issues and personal growth. All dramedies, these films have equal doses of painful reality and delightful humor.

After the September 27th screening of the film at The Museum of the Moving Image, Duplass, Kelly and Zissis sat down and discussed the film, getting into the making of the film and the process of bringing this hilarious story to the big screen. Cool and casual, the three men answered questions from the audience and continued to make jokes along the way, providing for a very enjoyable evening.

The Do-Deca-Pentathlon has a lot to offer audiences. It’s funny, warm and genuine. The direction and writing feel so real. It’s almost like a home movie, a shaky camera and awkward silences make for a very real-feeling film. The film has many great ingredients and it’s quite possible that this film will gain a cult status. It definitely has that sort of potential.

The acting is wonderful in The Do-Deca-Pentathlon. Steve Zissis and Mark Kelly steal the show. Their chemistry or lack thereof, is really fascinating and will definitely keep future audiences hooked. Dramedies are a reflection of life. There are the funny times and sadly, there are the low points. The Do-Deca-Pentathlon is a wonderful blend of both the happy and the sad and all those who are competitive wether you have a sibling or not.