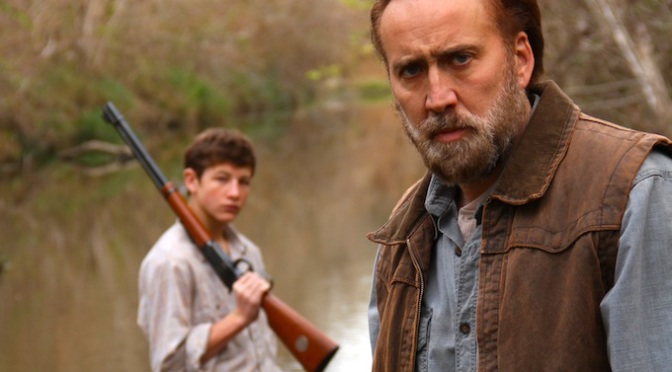 Hey, remember Nicolas Cage? That eccentric Academy Award-winning actor who has enjoyed a career full of many ups and downs. It’s very difficult to predict the thespian’s next move, wether his next film is going to be a flop or hit. His latest project Joe, fortunately manages to overcome mediocrity and thankfully, entertains and attracts audiences for its 117-minute run time.

Set in a rugged and rural part of Texas, ex-con and “tree-poisoner” Joe Ransom (Cage) is searching for something he lost a long time ago. He has poor luck with women, has a slight drinking problem, and has a viscous enemy from his past out after him. One day, he crosses paths with 15-year-old Gary Jones (Tye Sheridan), an honest, hardworking kid who has a violent psychotic drunk for a father. Joe decides to give Gary a job and in doing so, makes a friend.

Joe is a character-driven drama through and through with a strong emphasis on the father-son dynamic, doing what’s right and protecting those who need protection. Cage gives a subdued yet strong performance as Joe and Tye Sheridan (Mud, The Tree of Life) is also powerful as an abused individual determined to overcome his hardships.

Screenwriter Gary Hawkins (The Rough South of Larry Brown) has written dialogue that cuts to the core of human drama. His words of course are based on a novel by the late author Larry Brown (Big Bad Love, Facing the Moon). Brown was a firefighter in Mississippi whose stories often shed light on honor and heroism much like the gallant acts shown in the film by Joe.

David Gordon Green (Eastbound & Down, Pineapple Express) has a great skill directing actors and even non-actors. Many of the extras and characters in the film were actually just regular folks who lived and worked in the area. That gritty sense of realism is ever present in Joe and that coupled with Cage’s electric performance are what make the film stand out among a lot of the other dramatic thrillers out there these days.

Joe opens in limited release this Friday, April 11th as well as on iTunes and VOD.