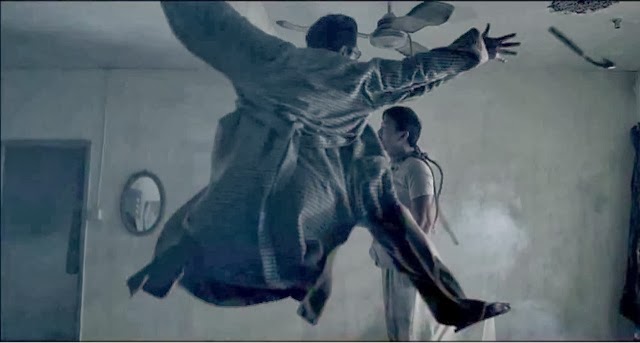 Asian horror cinema is one of the most original and frightening forms of storytelling around. Films like Ringu and Ju-on: The Grudge are solid proof that the far east offers exciting new platforms for supernatural creatures (like ghosts) to scare and entice. A slightly interesting but overall mediocre new film, Rigor Mortis continues this trend, but, sadly, the results are somewhat disappointing. This horror-action hybrid from Hong Kong is actually a tribute to the 1985 horror-comedy Mr. Vampire, and contains some of the same actors from that film.

Taking place in an apartment housing complex in Hong Kong, Rigor Mortis focuses on washed-up actor Chin Siu Ho, played, appropriately enough, by Chin Siu-Ho. With his family out of the picture and his career in the toilet, Chin decides to end it all by hanging himself. When he attempts to do this, he becomes possessed by dark spirits which lived in his apartment before him. The rest of the film focuses on the supernatural turbulence which occupies the creepy and extremely dreary-looking building.

With the horror elements in place, pop singer turned director Juno Mak decided to throw in a healthy dose of martial arts action as well. Chin Siu Ho and his co-star Anthony Chan do battle with the malevolent forces in the building, and the results in that department are actually halfway decent. The film doesn’t make a whole lot of sense, but when fists start flying and the bodies begin to pile up, the entertainment value certainly rises. It’s just unfortunate that the filmmakers of Rigor Mortis didn’t focus more on a cohesive and intelligent plot.

Every one of the actors in the film gives it their all here and it shows. With such a dark setting, both figuratively and literally, the atmosphere is perfect for a deeply layered and intriguing story. Unfortunately, the only highlights of Rigor Mortis include elaborate fight sequences, the occasional intense performance, and attractive visual effects shots which might be described as “artistic”. The slow motion shots and visual effects are quite alluring, somewhat reminiscent of Watchmen and Sin City. These lovely moments are scattered throughout the film and they definitely elevate it to better heights. Sadly, there aren’t enough of these moments to save the overall piece from mediocrity.

With a somewhat confusing story and a haunted house premise, many might think Rigor Mortis is a dark comedy. It is not. It is simply a film that doesn’t really know what genre it is. It is a mix of many things, a cocktail if you will, of many different genres. With that in mind, there is something in the film for everyone, but this does not mean that everyone will enjoy it. The film is a lame attempt at greatness wrapped in a glossy and attractive package. If one feels inclined to spend 105 minutes scratching their head, trying to understand the pointless and convoluted story, then this is the perfect film for them.

Rigor Mortis will be released theatrically on June 6th.