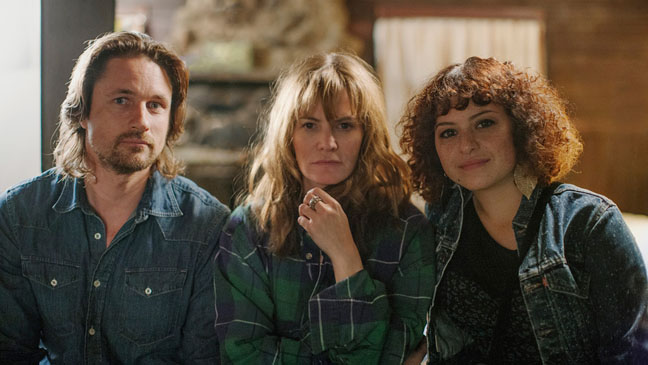 Mental illness has long been a subject wrought with stigma and social taboos. Though even today those stigmas remains people are now more accepting of those troubled with emotional problems. The mission of psychiatric care mission is to learn why people think and behave the way they do. In the new drama The Moment, Jennifer Jason Leigh plays a woman who is struggling with a very personal and internal battle. While the performances in this film are above average, the film as a whole is severely lacking.

The Moment focuses on Lee (Leigh), a war photojournalist who has seen her fair share of horribleness. She has flashbacks and obsessive beliefs that she has a rash all over her body. When her boyfriend John (Martin Henderson) goes missing, she begins to feel as though she’s losing her grip on reality. Things take a turn for the worse while at an art gallery event, where she goes into the bathroom and begins violently scratching at her “rash”. When she emerges from the bathroom nude, this generates concern from her daughter Jessie (Alia Shawkat) and her ex-husband Malik (Navid Negahban). Lee is then taken to a psychiatric facility where she is medicated and monitored. Her healing process begins only to be disrupted by the presence of a fellow patient who bears a striking resemblance to John.

Psychological dramas usually suffer from being overlong and melodramatic. The Moment, while not a terribly long film, feels like a film with no end in sight. It is a depressing film with very little in terms of humor or excitement. Jennifer Jason Leigh does gives a strong performance as Lee and she should be commended for that. She has certainly come a long way from Fast Times at Ridgemont High. Alia Shawkat of Arrested Development fame gives a decent performance as well as Leigh’s free-spirited daughter. She’s very natural in front of the camera and really dives into the role head first. Unfortunately, the same can’t be said about Martin Henderson (The Ring, Smokin’ Aces), the actor who portrays her husband, who is really nothing more than just a pretty face.

Relatively unknown director Jane Weinstock (Easy) has a pretty good handle over the camera and with shaky handheld camera movements and quick cuts, she creates an atmosphere which is realistic, bleak at times, and pleasantly gritty. The screenplay, which Weinstock cowrote with Gloria Norris (Home Movies), could have a been better. The characters aren’t fleshed out enough and the only person whose psyche we get deep look into is Lee’s. The other people in Lee’s world are also screwed up and they deserve to be analyzed too. Aside from the actors giving it their all and Weinstock’s crackerjack camerawork, The Moment is nothing more than 90 minutes of the cast and crew asking the viewer if they give a crap. If you want to see Leigh in a fine yet gloomy role in a film that meanders and doesn’t really go anywhere, then this film is definitely worth your time.