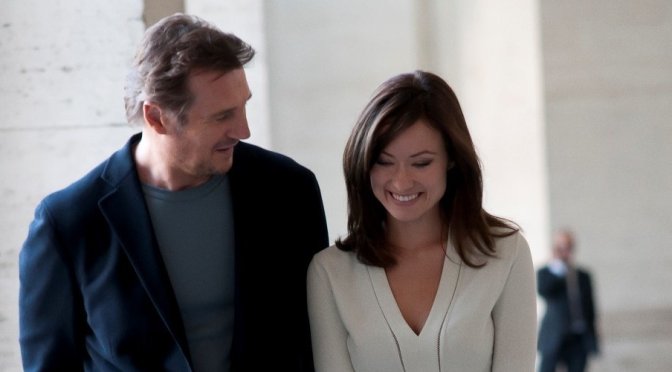 Paul Haggis is a man of many talents. He is a prolific filmmaker who writes, directs, and produces. He has won Academy Awards for his work on Million Dollar Baby and Crash, both films which were released back to back (2004 and 2005 respectively). He is known for his raw human dramas and for interconnecting multiple storylines and characters. Crash is famous for this type of storytelling and so is his latest film Third Person, a psychological drama highlighting the very subtle nuances of human interaction, love, and trust.

With an all star cast and three completely different settings, Third Person has all the ingredients of a captivating dramatic film. The film tells three stories in three different cities. There is a love affair in Paris between Michael (Liam Neeson) and Anna (Olivia Wilde) which has its ups and downs. There is a former married couple (Mila Kunis and James Franco) struggling over the welfare of their son. Lastly, in Rome, a charismatic thief (Adrien Brody) gets involved with a gypsy woman who may or may not be a con artist herself.

These three tales connect but in very subtle ways. Haggis has a way of making each individual story work as a singular entity only to bring it all around full circle. With a firm command of dialogue and a profound understanding of human interaction, Haggis has a another hit on his hands with Third Person. This film, while not exactly a summer blockbuster, it is a powerful film which delves into the awkward tension and discomfort of real life.

Because of Haggis’ strong artistic appeal, the cast in Third Person is basically a who’s who of A-list actors. They include Liam Neeson, Olivia Wilde, Adrien Brody, Maria Bello, and Kim Basinger. Newcomer to the group and one of the film’s most powerful performances comes from Israeli beauty Moran Atias (Crash series, The Next Three Days). She plays a sexy Roman woman with ambiguous motives. She is feisty, gorgeous, and genuine. She definitely steals the show here.

Third Person tells three supremely unique stories in a beautiful way. Haggis jumps from one plot to the other but the editing makes it feel like one long epic. The characters may be different but their actions are very similar. Many of them are all lost souls who are selfish and conniving. The romance between Neeson and Wilde is strained and full of harsh realness and Kunis and Franco’s dissolved marriage is at times painful to watch. Brody and Atias’ relationship is the film’s strongest bit and both actors play it just beautifully.

Haggis’ Third Person is the stuff of pure greatness. The screenplay is tight and raw. It feels real and Haggis’ direction only makes it better. His cuts are genius and the lighting at times excellently sets the tone of a human drama filled to the brim with personal dilemmas. Haggis is a filmmaker who takes his craft seriously and with films as good as Third Person, let’s hope the man has a lot more to offer us.