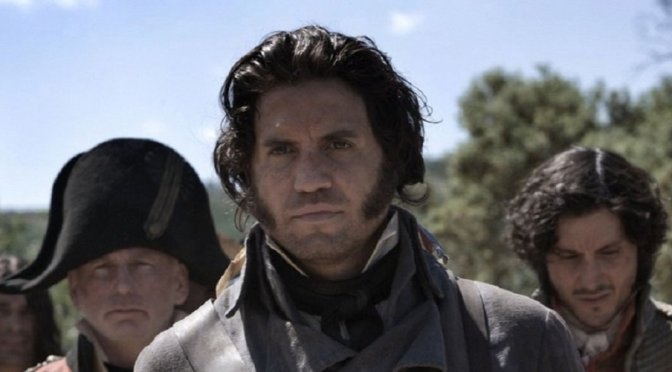 Throughout history, there have been those who have instilled change and promote progress. Individuals such as these are often seen as heroes and their efforts to better things don’t go unnoticed. Simon Bolivar is one such individual and his political and military endeavors are the stuff of legends. The latest film The Liberator is an epic biodrama that highlights Bolivar’s life and his valiant efforts which made a significant historical impact on Latin America. It is a big budget biography with high ambitions and an even higher production cost.

Edgar Ramirez (Carlos, The Bourne Ultimatum) stars as Bolivar, “The Liberator”, a man whose passion for revolution and national independence is what put him in the history books. The film follows a young Bolivar, who starts out as a privileged rich kid who beds young beauties and yearns for a more meaningful life. He eventually develops a revolutionary spirit and fights in wars designed to liberate his home country of Venezuela. Bolivar was instrumental in Latin America’s quest for independence from the Spanish Empire during the 1800s. The Liberator chronicles the young revolutionary’s life from the over 100 battles he fought to the many lives he changed in the process.

Few films these days manage to capture the raw intensity and unbridled power of a man and an era so dramatic that its reputation just leaps off the history pages and hits you so profoundly.The Liberator is a beautifully crafted film courtesy of director Alberto Arvelo (Cyrano Fernandez, A House with a View of the Sea) and production designer Paul D. Austerberry (The Twilight Saga: Eclipse, Resident Evil: Apocalypse). These two artists have fully captured the 1800s and Bolivar’s colorful and wonderfully adventurous life. The man and the legend are truly brought to life and everyone involved with the film’s production should be commended for their artistic contributions.

Traditional historical dramas are not the norm this day and age. Fantasy epics full of magic and the supernatural have apparently replaced the standard sword and shield adventure. The Liberator harkens back to the days of Braveheart and Gladiator, noble tales of epic heroes who fight for what they believe in without monsters and silly hocus pocus. There is little to no computer-generated imagery in The Liberator and that fact is truly refreshing. The film relies on lavish production values and a very solid performance from Edgar Ramirez.

Bolivar is a man whose life hasn’t really been given a powerful representation on film… until now. The Liberator has all the elements of an epic blockbuster and then some. The only issue some audiences might have is that the film is spoken primarily in Spanish and uses subtitles. This does add to the film’s authenticity but then again, people don’t typically like “reading” when they’re watching a movie. This is a minor issue in an overall decent picture. That being said, the film’s greatest asset is Ramirez who delivers the strongest performance of his career. Ramirez IS Bolivar and his onscreen presence is magnetic. You will truly believe he is the revolutionary he is portraying and it is very possible that he won’t go home empty-handed come award season.