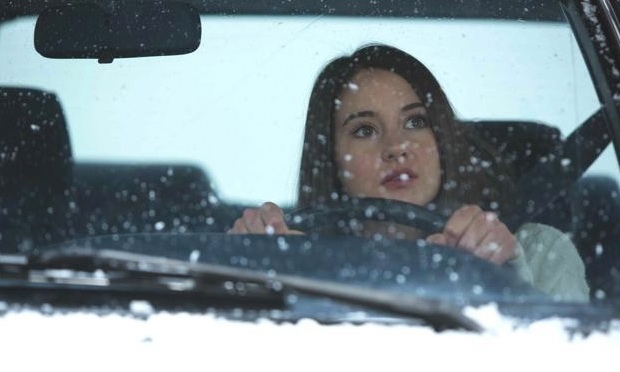 Shailene Woodley is something of a phenomenon. She basically appeared out of nowhere and stepped right into the spotlight with her fantastic performance as George Clooney’s outspoken daughter in 2011’s The Descendants. Since then, she has been quickly moving up the Hollywood stardom ladder. At 22 year of age, she has shown a strong command of the dramatic arts and displayed a wide range in every role she chooses. Her latest film White Bird in a Blizzard continues to show audiences that she is more than just a pretty face and can tackle some very heavy material.

Blizzard takes place in 1988 and focuses on a seemingly typical American family. Though, what appears to be a normal functioning bunch turns out to be far from it. Kat Connors (Woodley) is a smart resourceful 17 year-old girl who senses things are very much amiss. Her mother Eve (Eva Green) exhibits signs of psychosis and her “happy” little homemaker existence is really getting to her. The patriarch of the family, Brock (Christopher Meloni) is a bit of a doormat, who also shows signs of mental wear and tear. Kat senses this and doesn’t really know what to do. One day, Eve goes missing and this throws everything out of whack. The rest of the film focuses on Kat as she tries to live her life not knowing what happened to her mother and the mystery behind it all.

With a strong cast and talented filmmaker Gregg Araki, Blizzard has all the ingredients of a gripping drama. Young Woodley anchors the film exceptionally well and it is truly amazing how someone in their early twenties has such a powerful command of the movie. Roles like that of Cat truly test the skills and stretch the emotional canvas for an actor. She handles herself very well and Blizzard might bring the talented actress a few awards, if not a few nominations.

The whole “missing person” premise has been done many times before and the results are usually very similar. Blizzard tackles the subject in a subtle yet at times, horrific manner. The film is equal parts mystery and equal parts family drama and this quirky genre hybrid is the perfect recipe for film success. That and the dynamite cast are what really make Blizzard a winner Gabourey Sidibe, Thomas Jane and Angela Basset join Christopher Meloni, Eva Green and of course Ms. Shailene Woodley in what is probably one of the best casts of any film to come out in 2014.

With all that starpower and an expert filmmaker steering the ship, Blizzard is a winner on almost every level. The premise is sobering enough to be considered for some Academy Awards and with a film this layered and wrought with dramatic tension, some nominations might very well be in order. Though not the feel-good movie of the year, White Bird in a Blizzard is gripping yarn with some powerful performances and if you are a fan of Shailene Woodley then be prepared to be blown away.