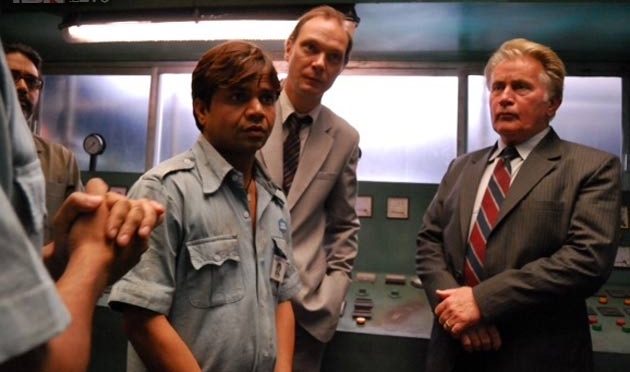 On December 2nd, 1984, a truly horrific event took place in Bhopal, India. The Bhopal disaster was an industrial gas leak, considered to be the worst manmade disaster in history. More than 10,000 people were killed in one night as a result of it and people are still feeling effects to this day. A semi-fictional feature film has been made to shed light on the disaster with a strong cast and exquisite direction. Bhopal: A Prayer for Rain is a dramatic depiction of the Bhopal disaster complete with a handful of interesting character backstories as well as some rather beautiful film visuals.

Bhopal takes place a few days before the disaster and focuses on those directly affected by the calamity. Dilip (Rajpal Yadav) is a struggling rickshaw driver who manages to land a job at a Union Carbide chemical plant. Thrilled by his new station, Dilip and his family take comfort in the fact that their financial situation is now secure. Another story involves two journalists, one American: Eva Gascon (Mischa Barton) and one Indian: Motwani (Kal Penn), who join forces to expose Union Carbide’s chief executive Warren Anderson (Martin Sheen). These random unrelated stories eventually intersect, providing for some pretty riveting cinema.

Martin Sheen gives a strong performance as usual and so does the rest of the cast. His corporate big wig attitude is basically a slimy unscrupulous version of his character on The West Wing. He runs Union Carbide with a sneaky iron fist and he is basically the film’s “villain”. Gascon and Motwani’s investigation of him and their pursuit of truth and justice serves as one of the film’s more interesting subplots and the relationship these two journalists form is believable and rather thrilling to watch.

In many ways, Bhopal can actually be compared to Titanic. In simplest terms, both films highlight human drama amidst a huge all encompassing disaster. Though there isn’t a love story in Bhopal, there is plenty of drama and the actors involved with the production deserve to be commended for their excellent work. With Bhopal, writer/director Ravi Kumar (Guilty Hearts, Notting Hill Anxiety Festival) has put together a film that is quite visually pleasing. The lighting in certain scenes is almost angelic and quite contradictory to the film’s impending doom. Good and bad clash in the film’s visuals, creating a sad yet awesome aesthetic bit of cinema. Composer Benjamin Wallfisch (V for Vendetta, Atonement) has even provided the film with a score that is serene, melodic and at times, somber, capturing the film’s mood perfectly.

A cautionary tale to prevent future disasters like Bhopal from ever occurring, Bhopal: A Prayer for Rain delivers a powerful message in a subtle and appropriate way. So many lives were affected by this disaster and three decades hasn’t gotten rid of its memory. The families of those killed should find solace in this film for it honors their memory in a very tasteful and respectful manner. Bhopal is an important film in many ways. The story is real and the actors due the tragedy justice. If you want to learn about a bit of important history that doesn’t get discussed too often, then it is highly recommended that you give this film a try.