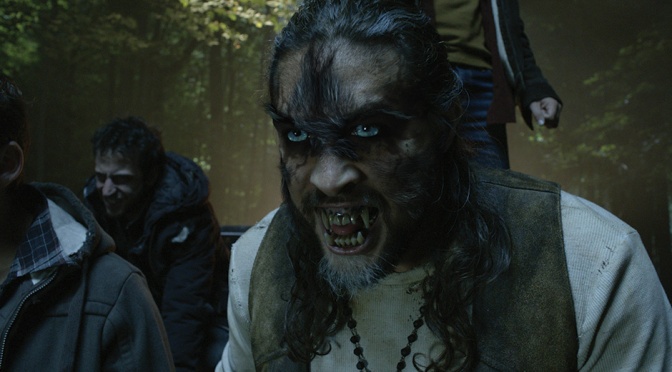 With the teen supernatural genre boom courtesy of Twilight, movies dealing with dark creatures have been dumbed down and cater to kids hungry for mindless entertainment. Sometimes, a film slips through that is intelligent and pays homage to the characters and their stories in a respectful manner but sadly, Wolves is not one of them. It has all of the ingredients that made the Twilight saga successful and then some. Unfortunately, those qualities aren’t the same as quality cinema. It has a very cheap feel to it and will probably fall into Netflix Instant obscurity.

Wolves focuses on Cayden Richards (Lucas Till), a hunky loner who, after the death of his parents, hits the road to start a new life. He eventually wanders into the sleepy town of Lupine Ridge, where he finds work and a place to stay with humble farmer John (Stephen McHattie). Soon, Cayden discovers a dark family secret: that he’s actually a werewolf and another local beast, Connor (Jason Momoa) has some truly nasty plans for Cayden and his new girlfriend Angelina (Merritt Patterson). The bulk of the film follows Cayden as he’s sucked into a world full of monsters and death.

Though a movie like Wolves is trash without saying, it does offer a few moments of horror film fun. The creature effects and makeup are actually really well-done and seem to be heavily influenced by the classic 1981 werewolf romp An American Werewolf in London, though not at that level of greatness. Actors Lucas Till and Jason Momoa become fully transformed into hairy beasts and duke it out toward the end of the film and it isn’t the worst thing in the world to watch. The stunt wires are barely visible and the over-the-top theatrics may make you cringe but it’s all in the good name of entertainment. It’s actually also reminiscent of a few episodes of Buffy the Vampire Slayer but again, not as good.

Writer/director David Hayter has given us Wolves but this contribution to American cinema is not exactly welcome. It is a lousy film with very little appeal and this is surprising considering the man is responsible for penning sci-fi greats like X-Men 2 and Watchmen, though he’s also responsible for the first X-Men and the phenomenally bad The Scorpion King. With such an erratic track record, film studios certainly try their hand at gambling when employing this man and unfortunately, Wolves is a losing hand.

With attractive actors and the always reliable Stephen McHattie providing some much needed quirkiness, Wolves falls short and that’s a real shame. Perhaps with stronger actors and a better script, the film would have triumphed but this is not the case. Wolves tries to venture into Twilight territory and younger viewers may eat this up stuff up but those seeking quality horror action need to look elsewhere. The film just feels cheap and uninspired and David Hayter is chiefly to blame. With his spotty resume, the quality of the man’s output is unpredictable to say the least and if movies like Wolves keep getting made, then it is a sad state of affairs for the horror/drama genre.