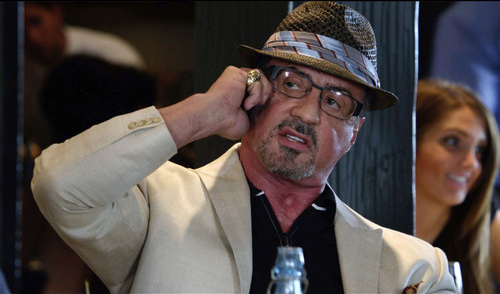 The self help book business is a thriving industry for many reasons: people want to better their lives, people don’t know where else to look for the answers to their problems and they often turn to a false prophet to help fix said problems. In the new dramedy Reach Me, a colorful group of characters played by an equally eclectic ensemble of well-known actors are all effected by a self help book and its recluse author. Each character who is touched by this “magical” book are from all walks of life and the finale eventually brings all of these random individuals together for one rather average film.

Reach Me contains an all-star cast and each character’s story directly or indirectly relates to mysterious self help author Teddy (Tom Berenger). The random group consists of reporter Roger (Kevin Connolly) and his quest to seek out the true identity of Teddy. There is Gerald (Sylvester Stallone), Roger’s editor. Kyra Sedgwick plays a newly released prisoner, who has benefited from Teddy’s book. Thomas Jane plays a hardnosed undercover cop. Lauren Cohan plays Roger’s love interest. Kelsey Grammer plays a shady politician. Rounding out the cast are Nelly, Omari Hardwick, Terry Crews, Danny Trejo, Ryan Kwanten and a very good Danny Aiello (where has he been?).

With such an amazing cast, it’s a shame Reach Me wasn’t a bit better. The fault would have to lie with writer/director John Herzfeld (15 Minutes, 2 Days in the Valley), who decided to cram all of this talent into a film that really isn’t very interesting. The story is lackluster to say the least and most of the characters are rather hollow. There isn’t a lot of originality in the dialogue and the plot sort of meanders. Entourage’s Kevin Connolly does his best in a lead role and the budding romance he has with The Walking Dead’s Lauren Cohan is cute enough to watch but the rest of the disappointing film brings everything crashing down. Herzfeld’s uninspired script is what really damages Reach Me.

The appearance of such big names doesn’t help Reach Me and you’d think it would. In fact, I think filling up a film with so many stars is a sign that the filmmaker is overcompensating. Kelsey Grammar is in the film for maybe a minute and he’s billed on the film’s poster. This is silly and it seems Herzfeld decided to load the film with big names to distract the viewer from a rather mediocre picture. While not a stellar film, Reach Me is not completely devoid of merit. Danny Aiello actually gives a strong performance as a priest riddled with issues. While his scenes are brief, they are probably some of the film’s saving graces. Sylvester Stallone also has some good lines, providing the film with some decent laughs. Basically, Reach Me suffers from having a filmmaker whose vision was a lot larger than the actual results he produced. Perhaps Reach Me might be better with repeat viewings but it will most likely fall through the cracks and find a hard time finding an audience.