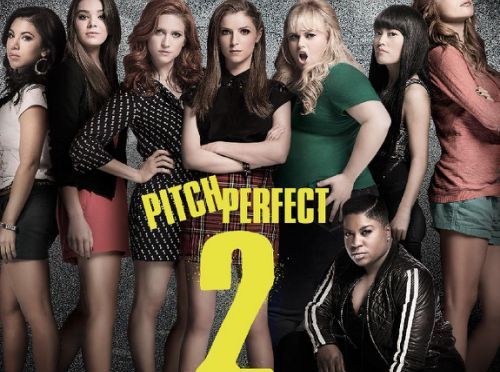 Prior to 2012, the art form known as “a cappella” wasn’t featured in movies too often. Singing without the aid of instrumental accompaniment is tough and in many instances, quite beautiful. The offbeat comedy Pitch Perfect took a cappella and shone a bright light on it, making it really quite popular. The film was a smash hit, catapulting young actresses Anna Kendrick, Rebel Wilson and Brittany Snow into superstardom. A sequel was inevitable and more songs were covered and audiences were in for not only a musical treat but a humorous adventure as well.

Since the events of the first Pitch Perfect, The Barden Bellas have used their vocal talents for various performance purposes. They are still in college and still very good friends. Led by Beca Mitchell (Kendrick) and Chloe Beale (Snow), they are more powerful than ever. They soon enter to compete in the Worlds in Copenhagen, where they cross paths with the cold German group Das Sound Machine. The Bellas soon begin a a rivalry, where only one team can reign supreme.

Like the first film, Pitch Perfect 2 has a fantastic soundtrack full of many popular hits given the delightful a cappella treatment. Opening things up is the iconic Universal Fanfare, harmonized by some of the film’s cast. There are also a bunch of medleys which are energetic, bad ass and downright cute. The male band in the film, The Treblemakers sing the playful Lolipop and Das Sound Machine provides some well-placed (and over the top) electronica, reminiscent of fellow German musician Peter Schilling.

One of the best tracks on the album is Winter Wonderland/Here Comes Santa Claus, performed exquisitely by Kendrick and Snoop Dogg. Together, these two form an unikely but fantastic duo with results that are sweet, hip and Christmassy. Also the track Jump is performed by three different a cappella groups and is funky and fresh. Promises/Problem is a sincere performance from the Bellas and the Back to Basics medley starts out old school 1940s and morphs into fun quirky power anthems.

Now with all of these new songs gracing the album, an oldie but a goodie from the first film must make an appearance. That song of course is Kendrick’s Cups, one of the best songs to come out in recent years and theme to the Pitch Perfect franchise. Her simple routine of utilizing the sound of plastic cups hitting a hard surface coupled with her own angelic voice has been a worldwide phenomenon since 2012. In Pitch Perfect 2, we are treated to a lovely rendition by The Bellas and the results are simply sublime. In addition, we get a cool solo from Wilson with the 80s classic We Belong. Having said that, the best track on the entire album by far would have to be World Championship Finale 2, which uses the Cups formula and stretches it out to a charming piece full of hope and optimism.

Composer Mark Mothersbaugh even provides some bouncy electronic musical score and while his contribution is instrumental, it is quite welcome indeed. Jessie J performs Flashlight and with its piano heavy sound, it is one hell of an inspirational track. Lastly, there is All of Me, performed by goofball Treblemaker Bumper Allen (Adam DeVine). This gentlemen is like a younger Jack Black and is definitely not for all tastes. So there it is, while the Pitch Perfect 2 soundtrack isn’t perfect, it is a fun 43 minutes that would be right at home in any teenage girl’s musical playlist. Let’s just see if Pitch Perfect 3 is on the horizon because this a cappella craze is really pretty great.