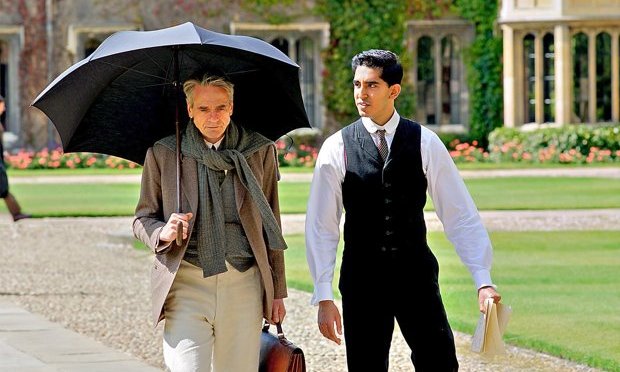 For many, mathematics is a field that is not only captivating and sometimes amusing but has the potential to unlocking the secrets of the universe. It is a field that some individuals are experts in and in the new historical drama The Man Who Knew Infinity, we are presented with a heartfelt story of not only men who are geniuses in math but we see their friendship and bond develop in a very touching way. Starring Dev Patel (Slumdog Millionaire, Chappie) and Academy Award-winner Jeremy Irons, Infinity is a film that will keep you glued to your seat all during its 108-minute runtime and will be sure to resonate long after the end credits roll.

Based on true events, Infinity begins in 1914 and focuses on Srinivasa Ramanujan (Patel), a young lower class Indian man, who just so happens to be a mathematical prodigy. Soon, he reaches out to Cambridge University in England, where he gets the attention of Professor G.H. Hardy (Irons) and they then begin a professional relationship in number theory and partitions. Their relationship eventually grows and not only do they become trusted colleagues but unlikely friends as well. The film follows these two mathematicians, as they brave illness, racism, and even war.

While The Man Who Knew Infinity may be a little cliche and familiar, it is a well-acted picture with a strong attention to detail and relatively smart script. One can actually feel as though they are in Cambridge during the beginning of World War I. The locations, sets, and costumes will all transport you to 1914. Even Bertrand Russell appears, played rather humorously by Jeremy Northam (Gosford Park, The Tudors). Newcomer filmmaker Matt Brown has adapted Robert Kaniglel’s 1991 biography of Ramanujan, The Man Who Knew Infinity, and brought it to the screen in a tender and very straightforward way. There isn’t a hint of pretentiousness or ridiculousness here as the film tells the true story in a very profound way.

Young talent Dev Patel has brought Ramanujan to life here and the results are pretty sensational. The genius mathematician has a quiet and humble air about him, yet his mind is working in overdrive. Patel portrays this larger than life figure in a way that is totally believable and extremely endearing. The same can be said for the legendary thespian Jeremy Irons, who has played an extremely wide array of characters over the years, from Claus von Bulow to Scar to Hans Gruber’s brother. And that’s just a few of his many extraordinary performances. G.H. Hardy is just another notch on the renowned actor’s belt.

The bottom line here is if you are interested in seeing a heartwarming true story about two geniuses who meet, collaborate, and develop a deep affection for one another, then this is the film for you. It isn’t a silly, loud, or obnoxious blockbuster. It is a quiet drama that tells an interesting story that happens to be real. The events actually happened and the the cast and crew have all contributed in reimagining what really happened and brought to the screen. Most of the elements of The Man Who Knew Infinity click, especially the chemistry between the two leads. Even This is definitely a film worth seeing and that is a mathematical certainty.

One thought on “The Man Who Knew Infinity”