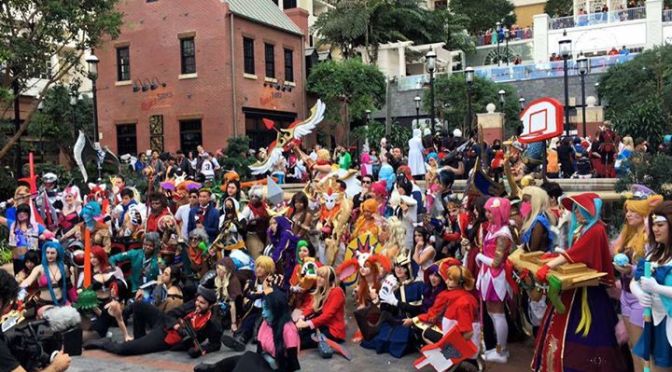 Every February, a little bit of Japan comes to Maryland. Actually no, that’s not right. A LOT of Japan comes to Maryland. The annual anime and cosplay festival glow sticks comes to National Harbor and attracts a bevy of anime enthusiasts and professional and amateur costumers. It is a yearly celebration and with thousands of joyful participants, it is truly a time to treasure.

Hosted once again at the Gaylord National Resort & Convention Center, Katsucon is a weekend long extravaganza that always promises fun and excitement to those in attendance. There are panels, screenings, merchants, games, and yes, a rave. People well-versed and even novices in anime would enjoy the informative panels. There are artists, vendors, and various individuals selling their wares. The floor is packed with interesting items for sale and many people eager to buy them.

Now I’ll be honest. I’m not much of an anime fan. In fact, I know very little about the art form but that’s okay because I still had a blast this year. Last year was my first foray into Katsucon and I was bit surprised. I have been to many comic cons before but Katsucon is really unique and something special and the reason I say that is because of two things: there is a game room and there is a rave. The game room is a large space that contains video games from yesteryear and today. I spent a good amount of time teaming up with a fellow con-goer trying to rescue Princess Toadstool in Super Mario Bros. 3. It was glorious. Also, with the con open pretty much all night, there is PLENTY of time to try and rescue said princess.

To finish off Katsucon, I immersed myself in the nightly rave and danced the night away with younger scantily clad attendees, waving around glow sticks, and showing off their impressive dance moves. All in all, it was a fantastic weekend, even better than last year and if you want to lose yourself for one exciting weekend, then I highly recommend glow sticks because you mill meet interesting people, gaze upon awesome cosplay, and form memories that will last you a lifetime. See you next year, Maryland!