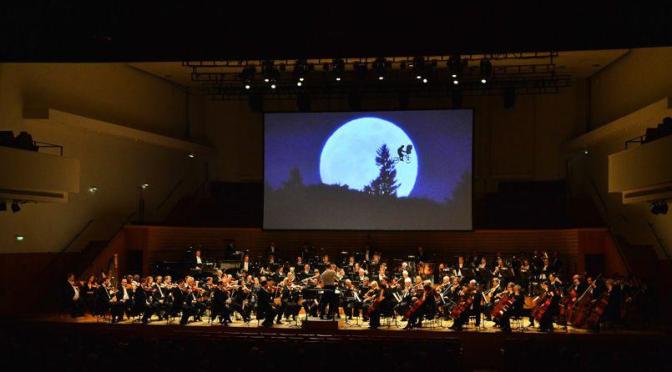 There have been many collaborations throughout cinema history that have made a memorable and profound impact on moviegoers. Creativity can only mushroom if likeminded individuals join forces and put forth great art together. Legendary filmmaker Steven Spielberg is one such individual and he has been working with maestro and genius composer John Williams for over 40 years now. Their work has gone beyond just art and continues to endure in the collective consciousness of society. The New York Philharmonic recently brought the Spielberg / Williams masterpiece E.T. the Extra-Terrestrial to vivid life as they performed the orchestral score live while the 1982 film screened simultaneously.

Now, in case you have been living under a rock for the past 35 years, E.T. tells the beautiful story of young Elliot (Henry Thomas), a lonely boy who encounters an alien creature and soon becomes friends with it. When the shady government learns of E.T.’s existence, they quickly try to capture him. What then transpires is an adventure like none other with a powerful friendship at the forefront between boy and alien lifeform.

During the weekend of May 12th, 2017, David Geffen Hall at Lincoln Center in New York City played host with conductor David Newman conducting the New York Philharmonic for this truly wonderful concert. John Williams’ music was brought to glorious life by all the players and the audience went on a journey both musically and visually. Actor Robert MacNaughton (who played older brother Michael) was actually in the audience as a special guest and this only added to the already magical evening.

The New York Philharmonic puts on concerts like this fairly regularly and the next performances to feature John Williams’ music will be in September with the Star Wars films. Click here for more information. An absolute treat for the senses, the New York Philharmonic certainly knows what they’re doing and if you are a fan of John Williams or film in general, then these concerts are definitely for you.