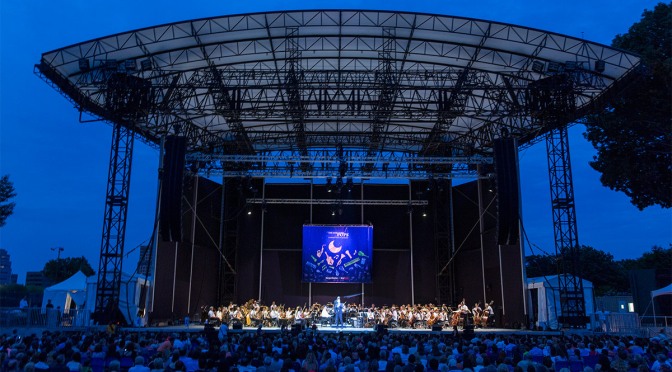 When it comes to film music, one name seems to pop up no matter how much of a movie aficionado or novice you are. He is a man with numerous awards and accolades to his name and he is responsible for scoring some of cinema history’s greatest titles. That man, of course, is John Williams and on June 8th, 2017, the Forest Hills Stadium in Queens, NY hosted The New York Pops as they performed Williams’ music in a glorious concert setting. It was a truly lovely evening featuring music played expertly in a more than special venue.

Built in 1923, Forest Hills Stadium was originally a glorious tennis court and in the 1960s, it became a glorious concert venue. The Beatles, Barbara Streisand, and Frank Sinatra were just a  few of the big names that performed in the space. Once the 90s hit, the stadium grew quiet. But in 2013, the venue was revitalized and for purposes of this article, the New York Pops graced the stadium with their presence and played Maestro John Williams’ iconic movie music.

The weather of the evening was perfect and the energy in the air was electric. The program of the concert included pieces from Jaws, Close Encounters of the Third Kind, Raiders of the Lost Ark, E.T. the Extra-Terrestrial, Hook, Schindler’s List, Jurassic Park, Harry Potter and the Sorcerer’s Stone, and the Star Wars films. Each movie’s score was brilliantly performed and with a gifted and charismatic conductor / musical director in Steven Reineke at the helm, the evening was certainly to remember. Leading the orchestra and providing a mini synopsis and history for each film, this only elevated the evening to much higher level. There were even special appearances by Darth Vader, Stormtroopers, Kylo Ren, and Jawas (people in costume, I hope.)

John Williams is by far, Hollywood’s most well-known film composer and his collaborations with filmmakers Steven Spielberg and George Lucas have provided audiences with some of the  most loved film music of all time. Forest Hills Stadium was the perfect venue for this concert and hopefully, more film composers’ works will be featured here. Being from Forest Hills myself, I was especially proud to be in the audience that night. With each piece played live, I got chills and I formed new memories of this incredible concert. The New York Pops and Forest Hills Stadium are responsible for this, those and of course Mr. John Williams.