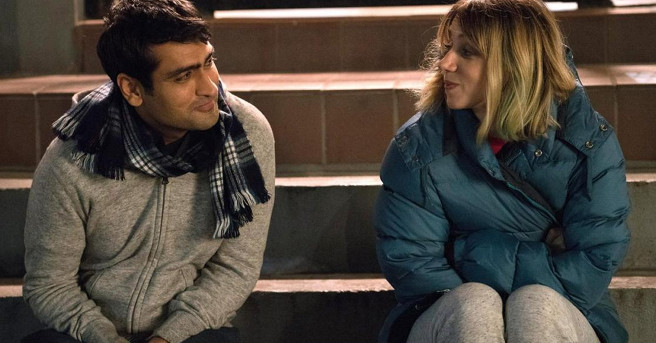 When a standup comedian makes the sometimes lackluster transition to feature films, it can be a risky move. The comic stage and the movie screen are obviously very different and sometimes, comedians’ success doesn’t transfer over. Thankfully Kumail Nanjiani (Silicon Valley, Adventure Time) has made a smooth move to film and the new romantic dramedy The Big Sick highlights his talents, not only as an every/funnyman but as a sensitive actor who draws the audience in.

The Big Sick is a romantic comedy with shades of seriousness. It is even actually based on Nanjiani’s real life. In the film, Kumail plays a Pakistani standup comedian who struggles with parents trying desperately to set him up on arranged marriages. He meets various Pakistani women who “happen” to stop by his parents’ house, so that they can eventually court Kumail. This serves as a constant annoyance and Kumail is actually seeking love elsewhere. One night, he meets Emily (Zoe Kazan) while performing a set and the two immediately hit it off. However, Emily is a white American and definitely not what Kumail’s parents are looking for. The romance is a little rocky and when Emily gets sick, Kumail comes to her side and forms a unique bond with her parents.

While The Big Sick doesn’t exactly break new ground in the romantic comedy department, it is a strong film with decent performances. Nanjiani is quite good here serving as star and writer. His true story about how he met his wife is presented adequately and is cute enough to serve as the film’s crux. Nanjiani’s dry, sarcastic delivery is really fun to watch and he is actually very unique in terms of comedic timing and dramatic skill. Zoe Kazan is cute as ever here as Emily and she also has a very charming way about her. Ray Romano and Holly Hunter play Emily’s down-to-Earth middle-class parents and they are without a doubt, some of the best features of this film. This is the actually first time I’ve ever appreciated something Ray Romano has done, that and being from Queens.

With so much junk out in theaters during the summer, it really is refreshing to find a movie as funny and smart as The Big Sick. The story is cute and the performances solid. Kumail Nanjiani is a pleasure to watch and he has proven here that he can carry a film exceptionally well. It’s also really nice to know that this film is based on a true story. That makes its impact a little stronger and more interesting to watch. Directed by Michael Showalter and produced by Judd Apatow and Barry Mendel, The Big Sick is a quality film through and through. It isn’t a laugh fest all the time and there are some serious issues presented (i.e. racism and illness) but there is a balance and the actors and crew maintain that balance. Couples looking for a movie to watch without explosions, pirates, or robot aliens fighting in 3D will appreciate The Big Sick for a being not only a movie about people but a movie about love, acceptance, and sacrifice.