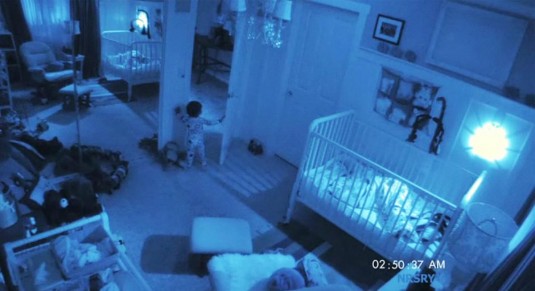 Taking place a few weeks before the firstParanormal Activity, Paranormal Activity 2 serves as a prequel to the hit film. An ordinary family, the Rey’s house is burglarized one day causing the father Dan (Brian Boland) to have surveillance cameras installed. He does this for the welfare of his family especially for the protection of his baby boy Hunter. In the next few days, strange things start happening. Noises are heard and objects start falling and moving throughout the house. The mother Kristi (Sprague Grayden) starts freaking out because she is worried about Hunter’s safety. There is also a teenage daughter who suspects the house is haunted. She even has a séance to try and get to the bottom of the supposed supernatural events taking place.

To connect to the first Paranormal Activity, the family in this film is related to Katie (Katie Featherston), the protagonist of Paranormal Activity. She is the sister of Kristi and there are actually scenes of her and boyfriend Micah hanging out with the Reys. These scenes are what ties the two films together and answers a few questions you may have about the first movie.

Like the first Paranormal Activity, Paranormal Activity 2 delivers the scares. There are quiet moments punctuated by loud crashes. These scenes in particular are what will probably give you the chills. This isn’t a slasher film gore fest. The horror here is subtle and more psychological. The things you don’t see are what will probably scare you the most.

The acting in this movie is relatively good. We the audience, are meant to believe that the events and characters in the film are supposed to be real and that we are watching them in an almost voyeuristic way. This type of movie genre is called “found footage” and is a type of filmmaking that creates a sense of reality to a fictional world. This genre has grown in popularity especially with horror films starting most famously with 1999’s The Blair Witch Project. Cloverfield is another excellent example of the found footage genre.

Director Tod Williams has certainly done an expert job shooting Paranormal Activity 2. The cutting and editing of the film adds to the suspense. With every passing day in the film, more anticipation builds. The audience is left thirsty for action. Watching the movie, I wanted to be scared more and more. Fortunately with every jolt of terror, my cravings were satisfied. The dialogue in the movie is also worth mentioning. Michael R. Perry, Christopher Landon, Tom Pabst have definitely crafted a very realistic script that most of the time seems improvised by the cast. This is great because it makes the script seem more natural and sincere.

Paranormal Activity 2 is a wonderfully spooky horror film that will be sure leave the audience’s hearts pounding with every shocking moment. If you want to be scared in a clever and effective way, I would recommend this movie for you. There isn’t a lot of blood and there isn’t a hockey masked madman terrorizing teens here. There are just cameras and the actors. The horror created by the filmmakers is there but the majority of the fear is in the audience’s imagination.

The bonus features for Paranormal Activity 2 are alright. There is some scary exclusive “found footage” and there is a teaser trailer for the film.