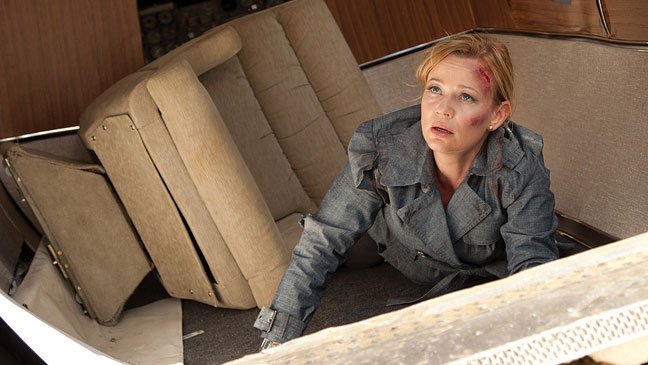 Ayn Rand was and continues to be a notable figure in both philosophy and politics. Her views are regarded by some as brilliant and by others, not so much. Her 1957 novel Atlas Shrugged deals with her philosophy “Objectivism” and shares her views on society. The novel which takes place in 2016 was turned into a 2011 film and a 2012 sequel Atlas Shrugged: Part II. Both films went fairly unnoticed and rightfully so especially with the sequel being poorly acted, uninteresting and filled with bad CGI.

Atlas Shrugged: Part II continues where its predecessor left off. Dagny Taggart (Samantha Mathis) and Hank Rearden (Jason Beghe) are business people who control much of the world’s power. Both tycoons, Dagny, railroad and Rearden, steel. When key people start disappearing, an investigation and conspiracy explode with Dagny and Rearden in the middle of it.

The film has a semi-engaging story but the script is cheesy and the acting, atrocious. The budget for the film seems pretty high but the results are just downright lame. The beautiful Samantha Mathis (Broken Arrow, Super Mario Bros.: The Movie) does her very best as Dagny but she just falls flat which is also due to the lackluster script. The same can be said about raspy-voiced Jason Beghe (Thelma & Louise, G.I. Jane). The only interesting thing about the man is his unique voice for he is not a very strong actor.

Atlas Shrugged: Part II is nothing more than a big-budget action-thriller offering nothing new. Fans of Ayn Rand will definitely hail this film as a piece of stellar art however all other audiences may disagree.

There’s a “Behind The Scenes of Atlas Shrugged Part II”, a Sean Hannity Extended Segment, some deleted scenes, and a Sneak Peek.