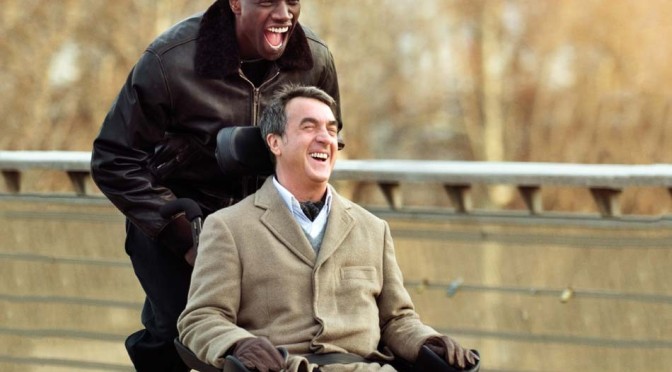 Male bonding is a theme that has been explored in cinema for decades. Friendship and mutual trust provide for strong storytelling and quality film. Olivier Nakache and Eric Toledano’s French dramedy The Intouchables is yet another fine example of this human subject. The story involves two unlikely individuals who are joined together in a fairly simple scenario. The friendship that results in their pairing provides for one the most charming films of 2012. The Intouchables is a truly touching film which features two strong performances and now you can enjoy it in all its Blu-ray goodness.

Philippe (François Cluzet) is a wealthy Parisian who lives a luxurious existence in a large mansion with a dedicated house staff. The only issue is that he is a quadriplegic and requires the aid of someone 24/7. Philippe eventually comes across Driss (Omar Sy), a fiery young ex-con from the streets. After some hesitation, Driss is hired as Philippe’s aid and that’s when the story really takes off.

The Intouchables is a lovely film anchored firmly by its two main leads. Cluzet (Tell No One) plays Philippe beautifully, a man who is crippled but still manages to enjoy the finer things in life. Sy (Micmacs) also gives a fine performance as a young man who ends up in a situation that he had no idea would lead to such a powerful conclusion. Together, these two actors light up the screen and offer audiences a bittersweet look into a true “odd couple”.

Writer/directors Eric Toledano and Oliver Nakache (Those Happy Days) have put together a truly wonderful film here. Based on a true story, The Intouchables takes the simple concept of friendship and explodes it. There aren’t cliches or large doses of predictability here. This is a story that takes the viewer on a trip that many big-budget blockbusters fail to do. There is a story and it is told intelligently and with large dose of heart and warmth.

Though some American audiences may cringe at the thought of reading subtitles, the emotions and facial expressions displayed by the film’s actors will make reading them a breeze. The two main leads ooze with charm, humor and love. Wether they have a wide smile or seem to be angry, reading their emotions is not a problem whatsoever.

Being a French film, The Intouchables feels rather universal. It’s message is clear in any language and the setting in which the story is told can take place anywhere. The main focus is that of the relationship between Philippe and Driss.

The supporting cast is also worth mentioning. Anne Le Ny (The Taste of Others) plays Philippe’s head maid Yvonne and she does so with a touch of John Gielgud ala Arthur. She is proper yet sassy, providing the film with some extra humor and a strong female character. About the same can be said about Audrey Fleurot (Midnight in Paris), who plays Philippe’s personal assistant. She is beautiful, intelligent and somewhat cold, exactly what Driss is attracted by.

The Intouchables is given a rather good Blu-ray treatment. The main attraction is obviously the film and it looks gorgeous. Most of the scenes are between Philippe and Driss. They vary from inside the mansion to outside in the Paris streets. Either way, the picture is superb, clean and vibrant. The sound is decent as well being mainly dialogue but then again, there is the occasional roar of a Maserati’s engine.

Few films in recent times have managed to capture the joy and love associated with the human spirit. The Intouchables does just that and then some. The acting, writing and direction are all magnificent. It was considered as a nominee for Best Foreign Language Film but eventually not included, a shame since it really is quite a special film.

The bonus features for The Intouchables are light but they suffice. They consist of some deleted scenes and some trailers.