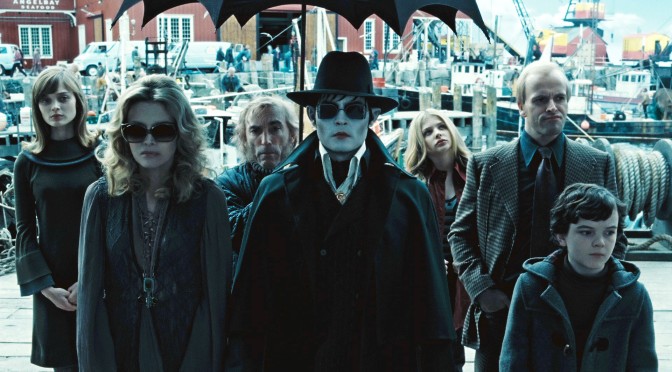 In the last decade, renowned auteur Tim Burton has sort of dropped the ball creatively. After 2003’s Big Fish, the goth filmmaker sadly stopped making quality films. It seems he has sold his soul to Disney and now only makes kid-friendly dark comedies with the exception of Sweeney Todd. He puts Johnny Depp in everything because the Burton/Depp collaboration is one which warrants great commercial success but offers nothing new in terms of artistic innovation. Dark Shadows is the eighth collaboration between Burton and Depp and unlike a fine wine, their team-ups don’t get better with age.

Based on the gothic 60s soap opera of the same name, Dark Shadows starts off in 1760 and focuses on the wealthy Collins family. They’ve moved to Maine from England to expand their lucrative fishing empire. Barnabas Collins (Depp) is the prince of the family and he is rather busy when it comes to succumbing to lustful desires. He gets involved with a maid named Angelique Bouchard (Eva Green) and soon breaks her heart only to be with another young beauty, Josette du Pres (Bella Heathcote). Overcome with feelings of betrayal, Angelique resorts to witchcraft to annihilate and curse the Collins family especially Barnabas. Angelique turns Barnabas into a vampire and locks him up in a coffin, burying him only to be accidentally dug out nearly two centuries later in 1972. Barnabas then returns to his home which is now overrun with wacky family members and characters strange to him since he is from a different era.

Johnny Depp anchors this film fairly well. His British accent from the Pirates of the Caribbean films serves him well once again. The makeup is terrific. His pale blueish skin tone and demonic hair are terrific and are probably the true highlights of the film. Depp is funny in scattered moments throughout the film. The lack of successful jokes is obviously the screenwriter’s fault and this is too bad because Dark Shadows is a film which has plenty of room for creative dialogue and sharp humor. Unfortunately, the jokes fall flat and the 70s flavored soundtrack only adds to the cinematic corniness.

The supporting cast is actually pretty talented. Eva Green (Casino Royale) is delightfully devilish as the woman scorned turned witch Angelique. Her over-the-top performance especially in the film’s final confrontation is simply delicious. Michelle Pffeifer returns in front of Tim Burton’s camera 20 years since her purrfect performance as Catwoman in Batman Returns. She plays Elizabeth Collins Stoddard and is sadly underused in the film. Elizabeth now runs the Collins household but the family home is in disarray and the fishing business is suffering due to a modern-day Angelique dominating the local fishing industry.

Like most of Tim Burton’s films, Dark Shadows contains the usual ingredients. There is Danny Elfman’s dark score which unfortunately, doesn’t bring anything new to this film. There is moonlight, fog and a haunted-looking mansion. The mansion serves as the backdrop for most the film’s action. The Collins family is now a zany collection of hippies and has-beens. Barnabas, even though he’s from the 16th century, provides a refreshing attitude and unique outlook on life.

Popular during its run, the television show Dark Shadows was a platform for many creepy characters. Vampires were just one type of character. Johnny Depp has given a very entertaining performance here. He is like Capt. Jack Sparrow with fangs are the results are somewhat mixed.

There are nine behind-the-scenes Focus Points and some deleted scenes.