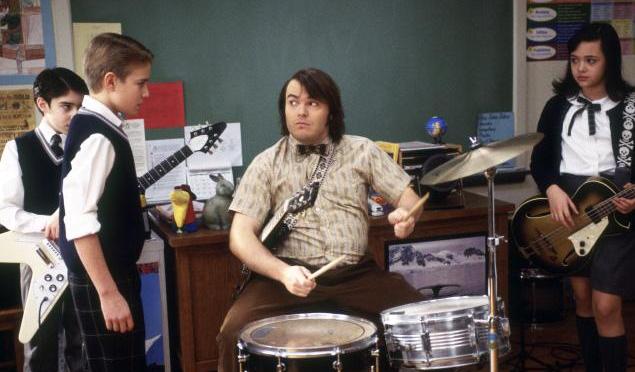 Jack Black is a man of many talents. He is an actor and a comedian but his real start came as a musician where he made up half of the two-man rock band Tenacious D. His skills as a musician would also serve him well later on in 2003 when he starred in the charming comedy School of Rock. It is now out on Blu-ray and it is really a quality film. It’s rated PG-13 so it is perfect for most age groups. Not violent nor vulgar, it has all the ingredients of movie suitable for most audiences.

Dewey Finn (Black) is a struggling rock musician who lives with his childhood friend Ned Schneebly played by writer of the film Mike White and his annoyed girlfriend Patty played by Sarah Silverman. Dewey falls on hard times when he gets kicked out of this band and can’t afford to pay his share of the rent. A phone call then comes in for Ned regarding a substitute teacher job and Dewey takes it pretending to be Ned.

Hilarity ensues when Dewey starts working as a substitute teacher for a fancy prep school and educates fifth-graders about what he knows best, rock music. Dewey then uses the teaching opportunity as a chance to turn the young students into a new rock band to win a Battle of the Wins so that he can use the $20,000 prize to help pay his rent. Nice, huh?

School of Rock is Jack Black’s show through and through. He not only carries this film exceptionally well but he leaves a long and everlasting imprint on the audience’s memory. With a career playing obnoxious chubsters, Black was way past due making a movie where he comes off as likable and somewhat endearing. School of Rock was his moment and with this moment, came a new Jack Black. He actually came off as a good guy, one who viewers want to see triumph and save the day.

The rock music references are genius especially Dewey’s chalkboard diagram of rock music where he educates the students on the many facets of rock. Fans of old school rock will jump for joy and younger, more casual fans of the music genre will learn a thing or two. School of Rock is a film that offers something for everyone. Families will go gaga for Jack Black’s lovable oaf, an affection that would benefit the actor later on during his Kung Fu Panda-monium.

Director Richard Linklater is no stranger to hip, likable pieces of cinematic art. Before School of Rock, Linklater treated audiences to the trippy animated adventure Waking Life, a film which will transport you to psychedelic places beyond your wildest dreams. School of Rock is a lot tamer and doesn’t take audiences into chemically-tripped out places. Families will rejoice and take comfort in knowing that Linklater’s School of Rock is a PG-13 family comedy, one that everyone can enjoy without any awkwardness, regret or both.

Jack Black is the star of School of Rock. There is no doubt about that. But, let’s not leave out his stellar supporting cast. Joan Cusack plays the stiff principal of the school Rosaline “Roz” Mullins and she is absolutely wonderful. The woman certainly knows how to tickle an audience’s funny bone. Mike White and Sarah Silverman also provide some chuckles and the entire classroom of minors contribute to School of Rock’s charm and humor. This film is a knockout and is welcome addition to anyone’s Blu-ray collection. Jack Black is here and School of Rock is in session.

The bonus features for School of Rock deserve an A+. There is a commentary with Jack Black and Richard Linklater, a kids’ commentary, Lessons Learned on School of Rock, Jack Black’s Pitch to Led Zeppelin, School of Rock music video, Kids’ Video Diary: Toronto Film Festival, MTV’s Diary of Jack Black, Dewey Finn’s History of Rock and lastly, there is a theatrical trailer for the film.