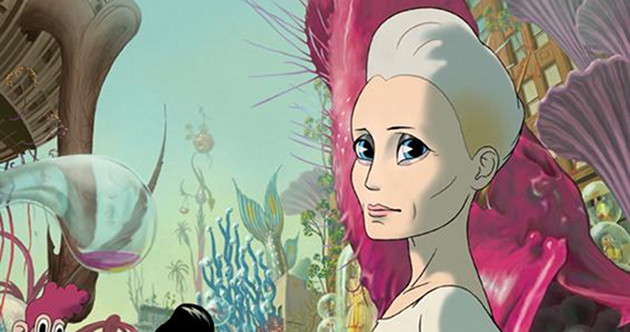 What happens when youth and beauty start to fade? Well, in Hollywood, when that happens, the once beautiful actress and symbol of all things young and sexy is put out to pasture. The sad truth is that once an actress is past her prime, she is no longer in demand. Everything she worked for and went through will be nothing more than a memory, a piece of history. The Congress is a bleak, honest, and entertaining sci-fi drama which addresses the issue of age and celebrity, a very important part of the entertainment business. This film explores said issue in a way that is unique, scathing, and at times, kind of fun.

The film focuses on a fictionalized version of Robin Wright (The Princess Bride, Forrest Gump). She has been acting since the 80s and her stardom has been fading for some time now. She has a supportive agent and friend in Al (Harvey Keitel), who wants nothing but the best for Robin. The head of Mirimount Studios, Jeff Green (Danny Huston) is a dark and sinister individual who wants to scan Robin’s likeness into a digital file. He basically wants to use Robin’s essence and download it into the Mirimount computers. This way, the youthful and beautiful presence of Robin can be preserved forever. This does have drawbacks however, leaving the real Robin without work and without any real purpose other than caring for her ailing son Aaron (Kodi Smit-McPhee).

The Congress is a very interesting film in that it covers a wide range of genres and tones. For instance, the second half of the movie has Robin enter a bizarre hallucinationatory animated world run by Mirimount. In this cartoon world (reminiscent of Cool World), anything is possible. You just imagine something and it just manifests itself. Robin journeys through this odd universe and along the way; she meets Dylan Truliner (Jon Hamm), the head animator in charge of the “Robin Wright department”. The two then must venture through the cartoon world in order to survive hostile rebels who populate the realm.

Placing The Congress into specific categories is not an easy thing. I mean, it’s a sci-fi drama filled with animation and adventure. It’s all over the place and a bit hectic times but it does address the notion of celebrity and age especially in this digital era. Robin Wright knocks it out of the park playing a pseudo version of herself. Her performance is genuine and among the best of her career. The always reliable Harvey Keitel plays the role of Robin’s agent subdued and kindhearted and Danny Huston definitely steals the show as the head of Mirimount whose sole mission is to make money off of Robin.

The Congress is a film in a league of its own and director Ari Folman (Waltz with Bashir, En terapia) has adapted Stanislaw Lem’s cult sc-fi novel The Futurological Congress masterfully. There are many layers to the film and the characters (especially Robin) are flawed and tragic. The Congress may be science fiction but it has at its core, a certain warmth and humanity most sci-fi cinema lacks today.