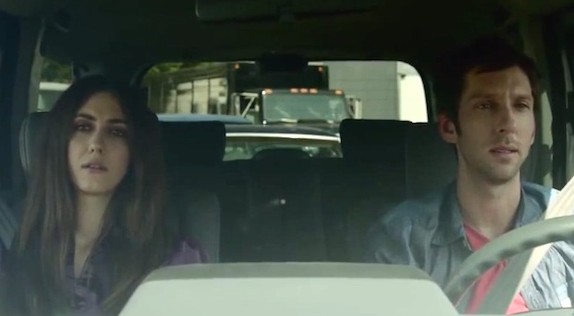 Romantic comedies aren’t exactly thriving these days. Attractive leading actors can only take an empty soulless story so far. Fortunately, there are the occasional instances when original ideas grace the silver screen and talented actors utter sharp and witty dialogue thus making for an enjoyable film. The latest bit of raunchy cinema comes in the form of #Stuck and despite its overly hip title; it is actually a rather pleasant and smart comedy that will most likely, hold your interest during its brief but strong 83-minute runtime.

The film is told in the wake of a standard one-night stand. Holly (Madeline Zima) wakes up in Guy’s (Joel David Moore) bed and is a tad hungover. She wakes up not too thrilled and is soon forced into an awkward situation, getting a ride from the gentleman she was quietly trying to avoid contacting the morning after. To make matters worse, Holly and Guy end up in busy Los Angeles traffic, forcing the two to eventually converse to pass the time. Needless to say, things get uncomfortable and the two characters try to make the most out of their less than desirable predicament.

#Stuck has a few clichés but it is far from cheesy. Zima and Moore anchor the film exceptionally well and aren’t only good looking but quick with their delivery and funny at times. These two actors actually have pretty impressive resumes. Zima is probably best known for her role as one of the children in the 90s sitcom The Nanny. She was the youngest. And Moore has enjoyed a decent career playing nerdy types in Dodgeball: A True Underdog Story, Grandma’s Boy and Avatar. Together, these two actors are a force to be reckoned with and their on screen chemistry in #Stuck is quite powerful.

With most of the film shot in the front seat of a car, one would think that the film would run out of steam fast. This couldn’t be further from the truth. The claustrophobic like nature of the set adds to the tension in the film and serves as a great “battlefield” for the two actors to unleash their insults and witty one-liners. There is also a good deal of flashbacks to allow the viewer to piece together exactly how Holly and Guy got together. This filmmaking style of cutting to previous moments in time and back to present provides for a slightly wild and lively method of storytelling. It certainly suits a film of #Stuck’s caliber.

The romantic comedy may seem dead but it isn’t. Raunchy humor and nudity have seemingly replaced the majority of intelligent love stories. That isn’t true with #Stuck. The premise is original, the actors extremely talented and the script filled to the brim with biting wit. Few actors can make sitting in a car entertaining. Zima and Moore do just that. Their rapport is what truly sells the film and if you think this is just another lame romantic comedy, then think again. #Stuck is a breath of fresh air in an otherwise polluted stretch of road full of dismal romantic vehicles.